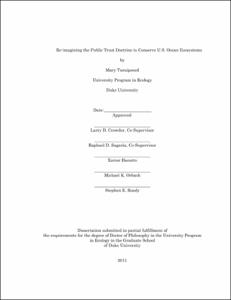 Sustainably managing marine ecosystems has proved extremely difficult, with few success stories. Traditional approaches to managing ocean-borne activities, including the structure of the governance systems themselves, have had difficulty keeping pace with the dynamics of coupled human, ecological, and oceanographic systems. In essence, our governance systems for ocean resources and environments have had difficulty keeping pace with advances in ocean use and exploitation technologies.

In the United States today there are over twenty federal agencies and thirty-five coastal states and territories operating under hundreds of statutory authorities shaping coastal and ocean policy. For years, among marine ecologists and policy experts there has been consensus that a major overhaul in U.S. ocean governance is necessary. This dissertation broadly suggests the public trust doctrine--an ancient legal concept that is already incorporated in U.S. state coastal laws--could uniquely provide a critical legal foundation for a new era in U.S. federal ocean governance.

Though the public trust concept can be located in the legal systems of many countries, it robustly manifests in the United States, where it has historically protected the public's rights to fishing, navigation, and commerce in and over navigable waterways and tidal waters. In its most basic form, the doctrine obliges governments to manage common natural resources, the body of the trust, in the best interest of their citizens, the beneficiaries of the trust. Today the public trust doctrine is integral to the protection of coastal ecosystems and beach access in many states and has even made its way into state constitutions. It would be simple, and seemingly logical, to assume that the same fiduciary responsibility of states to protect public trust uses of their waters extends to all marine resources within the United States' 200-mile Exclusive Economic Zone (EEZ). However an artificial line has been drawn around state waters, and the legal authority and responsibility of the U.S. government to protect public trust resources in the vast space of its EEZ (the largest of any country on earth) have never been fully and expressly established. The second chapter in this dissertation outlines the development of states' public trust doctrines; discusses the expansion of U.S. sovereignty over its neighboring ocean waters during the twentieth century; analyzes possible avenues for expanding the doctrine to federal waters; and considers how a federal public trust doctrine could clarify some specific issues in U.S. oceans management. At the heart of this chapter's analysis lie three questions: (1) does a federal public trust doctrine exist; (2) if so, can it be rightfully extended to include the entirety of the U.S. ocean waters; and (3) could the doctrine provide the missing catalyst for federal agencies to manage the use of U.S. ocean resources in a coordinated, sustainable fashion?

The third chapter asks how the public trust doctrine could inform marine spatial planning in US waters. It argues that in the absence of a statutory mandate for agencies to collaborate in their management of ocean-borne activities, the public trust doctrine could provide a framework for restructuring the way the US federal government regulates ocean uses. The forth chapter examines the blowout of the Deepwater Horizon oil rig on April 20, 2010, and surmises that regulatory capture of the Minerals Management Service aided by a balkanized ocean governance regime in the pre-Deepwater Horizon era provided a potent source of systemic risk in the U.S. offshore oil and gas industry. It discusses the factors contributing to MMS' susceptibility to capture in the pre-Deepwater Horizon era, as well as examples of decisions it made that suggest dynamics of regulatory capture were at play. The chapter then explores the reform of offshore oil and gas regulation under BOERME and the National Ocean Council to understand the how these new governmental structures might be less susceptible to capture. Lastly, the chapter considers the added value of extending two alternative versions of a clear federal public trust mandate - a foundational US natural resources doctrine - to offshore oil and gas regulation and, more generally, to coastal and marine spatial planning under the National Ocean Council.

The final substantive chapter of this dissertation concerns the US Interagency Ocean Policy Task Force and reports the results of a case study analysis that I conducted to explore how and why the Task Force designed the National Ocean Policy and interagency governance structure, the National Ocean Council, like it did. I found that the recommendations of the Task Force drew heavily from previous studies of US federal ocean policy and the Committee on Ocean Policy, which lasted from 2004-2009. Additionally I sought to understand the Task Force within the context of other US interagency collaborative efforts and theories concerning collaborative governance. I found that the Task Force process was characterized by several characteristics that policy scholars have previously identified as important to promoting collaboration among agencies. I also found support for the theoretical proposition that often external and political factors have major impacts on the level of success attained by interagency efforts. Lastly, via interviews with Task Force staffers and content analysis of public comments submitted to the Task Force, I determined that - though not included in the National Ocean Policy - there remains interest in the principles of the public trust doctrine as underpinning for the policy, which seeks "[t]o achieve an America whose stewardship ensures that the ocean, our coasts, and the Great Lakes are healthy and resilient, safe and productive, and understood and treasured so as to promote the well-being, prosperity, and security of present and future generations."