Genomic Signatures of Disease and Environmental Exposure in the Peripheral Blood 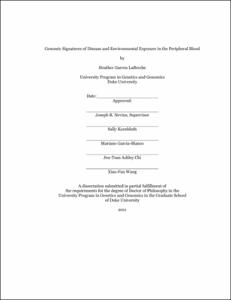 My thesis research has centered on the concept of the peripheral blood cell (PBC) as an indicator of disease and environmental exposure. The PBC is not only easily accessible and constantly replenished, but it provides a snapshot of an individual's health. Doctors have long utilized PBCs as indicators of health based on count, morphology or the expression of particular cell surface markers. Using these methods, PBCs can serve as indicators of infection, inflammation or certain types of hematological malignancies. Now PBCs can be characterized as a function of their gene expression profiles in response to disease and toxicant exposure. Advances in cDNA microarray technology have made it possible to analyze global gene expression in small volumes of whole blood, or even in a sorted population of blood cells. The resulting gene expression data can serve as a molecular phenotype, or signature, of disease or toxicant exposure. These signatures serve a twofold purpose. First, they act as biological markers (biomarkers) that can indicate the presence of disease or aid monitoring the response to treatment. Second, they provide insight into the underlying biological mechanisms that are at work, by revealing genes, networks and pathways that are affected by the disease or toxin. This paradigm has been applied in a number of contexts, including infection, inflammation, leukemia, lymphoma, neurological disorders, cardiovascular disease, environmental exposures and solid tumors.

In the work presented here, we describe signatures of lead (Pb) exposure and breast cancer based on peripheral blood gene expression. Our objective in generating a blood-based signature of lead exposure was to develop a potential predictor of past and present exposure. This is particularly relevant because of continued widespread lead exposure through both environmental and occupational sources. Pb causes significant toxicities in a number of different organ systems including the hematological, endocrine, neurological and renal systems. Pb is considered a potential carcinogen due to evidence that it causes cancer in animal models and contributes to an elevated cancer risk in humans. Pb is thought to contribute to cancer risk indirectly through a variety of mechanisms, such as inhibition of DNA synthesis and repair, oxidative damage, interaction with DNA-binding proteins and tumor suppressor proteins, causing chromosomal aberrations and alterations to gene transcription. In addition, it has been shown to exacerbate the effects of other mutagens. Recent work also indicates that even low-level Pb exposure (defined here as levels below the threshold of detection of many common tests or below the level set by the CDC as an "elevated blood lead level" in children, or 10µg/dL) can impact health, especially in children, who are more susceptible to these negative health consequences.

We hypothesized that we could detect subtle and lasting changes in the PBC transcriptome that correlated to Pb exposure. We used a mouse model of per os Pb exposure to generate signatures corresponding to two different doses of Pb. One dose reflected a high-level exposure and the other a low-level exposure. We also analyzed the gene expression changes following removal of the Pb source. We were able to generate robust, dose-specific signatures of Pb exposure. This supports the growing body of evidence that even low levels of Pb exposure can have biological effects, and that there is likely no safe level of exposure. We also utilized a collection of pathway signatures to identify those pathways that were activated or repressed in response to Pb exposure compared to controls. We observed an increase in interferon-gamma pathway activity in response to low-level Pb exposure and an increase in E2F1 pathway activity in response to high-level Pb exposure. These results support previous findings that low-level Pb exposure can increase interferon-gamma production, whereas high-level Pb has been shown to increase DNA synthesis. The Pb signatures we report here were not predictive of a past lead exposure. These results suggest that the effect of Pb exposure on PBC gene expression is transient, perhaps due to the rapid turnover of blood cells and the absorption of Pb by the bones. We have proposed further studies to identify cells in the bone marrow that may serve as indicators of past Pb exposure based previous reports on the lasting effects of genotoxic stress on this tissue.

We also describe a predictor of human breast cancer based on peripheral blood gene expression. The objective of this study was to identify and characterize PBC gene expression patterns associated with the presence of a breast tumor. This work has the potential to make a significant impact on breast cancer screening and diagnosis. Despite the success of mammography in reducing mortality from breast cancer, many cancers go undetected due to factors such as breast density, age of the woman, or type of cancer. A blood-based breast tumor predictor would potentially offer an easy and noninvasive means of detecting primary breast cancer as well as monitoring patients for recurrences or metastases. In addition, the concept of using a blood-based biomarker for cancer detection would have positive implications for other types of cancer. For instance, patients with ovarian cancer are typically diagnosed at a late stage because of the absence of definitive symptoms and the lack of effective screenings methods.

We were able to successfully identify robust predictors of both mouse mammary tumors and human breast tumors based on PBC gene expression. The human breast tumor predictor exhibits a high level of sensitivity and specificity in distinguishing breast cancer patients and controls in an independent validation cohort. However, the true novelty in this study is that it integrates a factor modeling approach and a transgenic mouse model of breast cancer to identify biologically meaningful gene expression changes in the mouse PBC transcriptome. These genes were then used as the starting point for developing a human breast cancer predictor. This establishes an experimental system in which we can address questions that are inherently difficult to answer in human studies, such as whether this predictor is useful in detecting breast tumors early or in monitoring patients for recurrence or metastasis. In fact, our work suggests that tumor-associated gene expression changes in the PBCs can be detected in asymptomatic mice. Our results support those of previous studies, which identified blood gene expression profiles that are associated with a variety of solid tumors, including breast cancer. However, the sensitivity and specificity of our predictor are higher than that of the previously reported breast cancer signature. This may suggest that our strategy of using a mouse model to first identify informative genes allowed us to focus on those genes most relevant to the presence of a breast tumor and overcome the influence of the high degree of variation in blood gene expression in our human population. In order to be clinically useful, the predictor we report here would need to be tested in additional, large validation sets to establish its utility in an early detection setting and its specificity in distinguishing breast cancer from other cancer types as well as other potentially confounding conditions such as infection and inflammation. We describe some preliminary experiments in the mouse model intended to address these important questions.