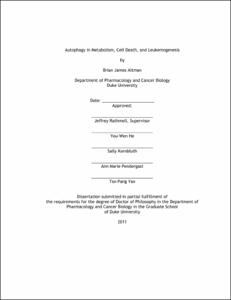 Tissue homeostasis is controlled by the availability of growth factors, which sustain exogenous nutrient uptake and prevent apoptosis. Cancer cells, however, can express constitutively active oncogenic kinases such as BCR-Abl that promote these processes independent of extrinsic growth factors. When cells are deprived sufficient growth signals or when oncogenic kinases are inhibited, glucose metabolism decreases and cells activate the self-digestive process of autophagy, which clears damaged organelles and provides degradation products as an alternate fuel to support mitochondrial metabolism. Importantly, loss of growth signals can also lead to apoptosis mediated through Bcl-2 family proteins, and Bcl-2 has been reported to interfere with autophagy, potentially disrupting a key nutrient source just as glucose uptake becomes limiting. Since autophagy may support survival or lead to death depending on context, the role of this pathway in apoptosis-competent growth factor deprived cells remains unclear.

In this thesis, I examine the interactions of autophagy with Bcl-2 family proteins and apoptosis upon inhibition of growth signals in hematopoietic cells. In contrast to other studies, I found autophagy was rapidly induced in growth factor deprived cells regardless of Bcl-2 or Bcl-xL expression, and this led to increased production of fatty acids and amino acids for metabolism. While these data suggested autophagy may play a key role to support metabolism of growth factor deprived cells, provision of exogenous pyruvate or lipids as alternate fuel had little affect on cell survival. Instead, I found that autophagy modulated cell stress pathways and Bcl-2 family protein expression in a context specific fashion to impact cell fate.

My results show that autophagy's effect on cell survival is dependent on its level of induction within a cell. I observed that partial suppression of autophagy protects cells from stress and induction of pro-apoptotic Bcl-2 family expression, while complete inhibition of autophagy enhances stress and is pro-apoptotic. In experiments using shRNAi to partially suppress autophagy, I found increased survival upon growth factor deprivation in several different types of cells expressing anti-apoptotic Bcl-2 or Bcl-xL, indicating that autophagy promoted cell death in these instances. Cell death was not autophagic, but apoptotic, and relied on direct Chop-dependent transcriptional induction of the pro-apoptotic Bcl-2 family protein Bim. In contrast, complete acute disruption of autophagy through conditional Cre-mediated excision of the autophagy-essential gene Atg3 led to p53 phosphorylation, upregulation of p21 and the pro-apoptotic Bcl-2 family protein Puma, and rapid cell death of cells the presence or absence of growth factor. Importantly, transformed BCR-Abl-expressing cells had low basal levels of autophagy but were highly dependent on this process. Deletion of Atg3 or treatment with chemical autophagy inhibitors led to rapid apoptosis, and BCR-Abl expressing cells were unable to form leukemia in mice in without autophagy. Together, my data demonstrate a dual role for autophagy in cell survival or cell death and suggest that the level of autophagy in a cell is critical in determining its role in apoptosis and cell fate. Ultimately, these results may help to determine future approaches to modulate autophagy in cancer therapy.