The Economics of Malaria Vector Control 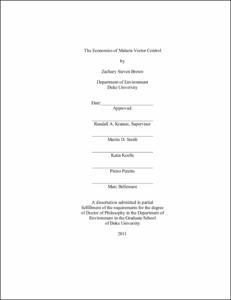 In recent years, government aid agencies and international organizations have increased their financial commitments to controlling and eliminating malaria from the planet. This renewed emphasis on elimination is reminiscent of a previous worldwide campaign to eradicate malaria in the 1960s, a campaign which ultimately failed. To avoid a repeat of the past, mechanisms must be developed to sustain effective malaria control programs.

A number of sociobehavioral, economic, and biophysical challenges exist for sustainable malaria control, particularly in high-burden areas such as sub-Saharan Africa. Sociobehavioral challenges include maintaining high long-term levels of support for and participation in malaria control programs, at all levels of society. Reasons for the failure of the previous eradication campaign included a decline in donor, governmental, community, and household-level support for control programs, as malaria prevalence ebbed due in part to early successes of these programs.

Biophysical challenges for the sustainability of national malaria control programs (NMCPs) encompass evolutionary challenges in controlling the protozoan parasite and the mosquito vector, as well as volatile transmission dynamics which can lead to epidemics. Evolutionary challenges are particularly daunting due to the rapid generational turnover of both the parasites and the vectors: The reliance on a handful of insecticides and antimalarial drugs in NMCPs has placed significant selection pressures on vectors and parasites respectively, leading to a high prevalence of genetic mutations conferring resistance to these biocides.

The renewed global financing of malaria control makes research into how to effectively surmount these challenges arguably more salient now than ever. Economics has proven useful for addressing the sociobehavioral and biophysical challenges for malaria control. A necessary next step is the careful, detailed, and timely integration of economics with the natural sciences to maximize and sustain the impact of this financing.

In this dissertation, I focus on 4 of the challenges identified above: In the first chapter, I use optimal control and dynamic programming techniques to focus on the problem of insecticide resistance in malaria control, and to understand how different models of mosquito evolution can affect our policy prescriptions for dealing with the problem of insecticide resistance. I identify specific details of the biological model--the mechanisms for so-called "fitness costs" in insecticide-resistant mosquitoes--that affect the qualitative properties of the optimal control path. These qualitative differences carry over to large impacts on the economic costs of a given control plan.

In the 2nd chapter, I consider the interaction of parasite resistance to drugs and mosquito resistance to insecticides, and analyze cost-effective malaria control portfolios that balance these 2 dynamics. I construct a mathematical model of malaria transmission and evolutionary dynamics, and calibrate the model to baseline data from a rural Tanzanian district. Four interventions are jointly considered in the model: Insecticide-spraying, insecticide-treated net distribution, and the distribution of 2 antimalarial drugs--sulfadoxine pyramethamine (SP) and artemisinin-based combination therapies (ACTs). Strategies which coordinate vector controls and treatment protocols should provide significant gains, in part due to the issues of insecticide and drug resistance. In particular, conventional vector control and ACT use should be highly complementary, economically and in terms of disease reductions. The ongoing debate concerning the cost-effectiveness of ACTs should thus consider prevailing (and future) levels of conventional vector control methods, such as ITN and IRS: If the cost-effectiveness of widespread ACT distribution is called into question in a given locale, scaling up IRS and/or ITNs probably tilts the scale in favor of distributing ACTs.

In the 3rd chapter, I analyze results from a survey of northern Ugandan households I oversaw in November 2009. The aim of this survey was to assess respondents' perceptions about malaria risks, and mass indoor residual spraying (IRS) of insecticides that had been done there by government-sponsored health workers. Using stated preference methods--specifically, a discrete choice experiment (DCE)--I evaluate: (a) the elasticity of household participation levels in IRS programs with respect to malaria risk, and (b) households' perceived value of programs aimed at reducing malaria risk, such as IRS. Econometric results imply that the average respondent in the survey would be willing to forego a $10 increase in her assets for a permanent 1% reduction in malaria risk. Participation in previous IRS significantly increased the stated willingness to participate in future IRS programs. However, I also find that at least 20% of households in the region perceive significant transactions costs from IRS. One implication of this finding is that compensation for these transactions costs may be necessary to correct theorized public good aspects of malaria prevention via vector control.

In the 4th chapter, I further study these public goods aspects. To do so, I estimate a welfare-maximizing system of cash incentives. Using the econometric models estimated in the 3rd chapter, in conjunction with a modified version of the malaria transmission models developed and utilized in the first 2 chapters, I calculate village-specific incentives aimed at correcting under-provision of a public good--namely, malaria prevention. This under-provision arises from incentives for individual malaria prevention behavior--in this case the decision whether or not to participate in a given IRS round. The magnitude of this inefficiency is determined by the epidemiological model, which dictates the extent to which households' prevention decisions have spillover effects on neighbors.

I therefore compute the efficient incentives in a number of epidemiological contexts. I find that non-negligible monetary incentives for participating in IRS programs are warranted in situations where policymakers are confident that IRS can effectively reduce the incidence of malaria cases, and not just exposure rates. In these cases, I conclude that the use of economic incentives could reduce the incidence of malaria episodes by 5%--10%. Depending on the costs of implementing a system of incentives for IRS participation, such a system could provide an additional tool in the arsenal of malaria controls.