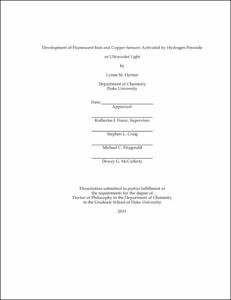 Fluorescent sensors provide a powerful analytical tool for the intracellular detection of metal cations. In some cases, these fluorescent metal-chelating sensors have helped elucidate the function of metal cations within complicated cellular systems. However, most measure or sense changes in the bulk concentration of a metal species and do not respond to those involved in a specific cellular event. For instance, misregulated copper and iron are implicated in neurodegenerative disease and cancer because of their ability to catalytically propagate the formation of the hydroxyl radical through reaction with hydrogen peroxide. A fluorescent sensor that is unresponsive to metal binding until activation by intracellular hydrogen peroxide could potentially pinpoint the location of this oxidative reaction and provide an understanding of the relationship between copper/iron and hydrogen peroxide.

Described here is the development of two fluorescent prochelators that show a selective fluorescence response to iron or copper only in the presence of hydrogen peroxide. A boronic ester masked spirolactam-based prochelator displays a copper-selective turn-on response after oxidation with hydrogen peroxide in organic solvents as determined by absorbance and fluorescence spectroscopy. However, a competing mechanism occurs in aqueous solution due to hydrolytic instability of the masked prochelator and results in a separate copper-dependent turn-on response as verified by liquid chromatography-mass spectroscopy. A second fluorescent prochelator design relies on metal-dependent fluorescence quenching after oxidation of a self-immolative boronic ester in both organic and aqueous solvents. Cellular microscopy studies show that the sensor's fluorescence intensity is unchanged until incubation with exogenous hydrogen peroxide, which resulted in a decreased fluorescent signal that is restored upon competitive chelation. Both of these prochelators provide a template for future applications and designs with improved properties.

Two additional chapters describe the development of a UV-activated iron prochelator and a new fluorescently tagged metal chelator. The UV-activated prochelator is protected with two nitrophenyl groups that are photolyzed with 350 nm light within 10 minutes to reveal a high affinity iron triazole-base chelator. A chelator of this nature may provide protection from UV-induced iron liberation and oxidative stress. A second triazole-based chelator with an embedded coumarin fluorophore was prepared as a potential metal sensor. However, this design showed off-target fluorescence responses, thus it cannot be utilized in its current form for metal detection.