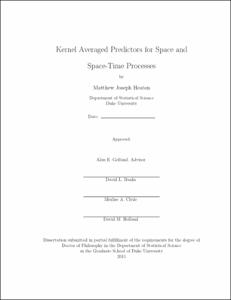 The contribution of this thesis is to propose a hierarchical modeling framework which captures complex spatio-temporal relationships between responses and covariates. Specifically, the models proposed here use kernels to capture spatial and/or temporal lagged effects. Several forms of kernels are proposed with varying degrees of complexity. In each case, however, the kernels are assumed to be parametric with parameters that are easily interpretable and estimable from the data. Full distributional results are given for the Gaussian setting along with consequences of model misspecification. The methods are shown to be effective in understanding the complex relationship between responses and covariates through various simulated examples and analyses of physical data sets.