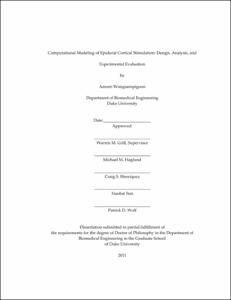 Epidural cortical stimulation (ECS) is a developing therapy for many neurological disorders. However, the mechanisms by which ECS has its effects are unknown, and this lack of understanding has limited the development and optimization of this promising therapy. This dissertation investigates the effects of ECS on the neurons in the cortex and how these effects vary with electrode geometry and location as well as the electrical and geometrical properties of the anatomy.

The effects of ECS on cortical neurons were investigated using a three dimensional computational model of the human precentral gyrus and surrounding anatomy. An epidural electrode was placed above the gyrus, and the model was solved using the finite element method. The outputs of the model included distributions of electric potential, the second spatial derivative of potential (activating function), and current density. The distributions of electric potential were coupled to compartmental models of cortical neurons to quantify the effects of ECS on cortical neurons. A sensitivity analysis was performed to assess how thresholds and distributions of activating function were impacted by changes in the geometrical and electrical properties of the model. In vivo experiments of epidural electrical stimulation of cat motor cortex were performed to measure the effects of stimulation parameters and electrode location on thresholds for evoking motor responses.

During ECS, the region of cortex directly underneath the electrode was activated at the lowest thresholds, and neurons deep in the sulcus could not be directly activated without coactivation of neurons located on the crowns or lips of the gyri. The thresholds for excitation of cortical neurons depended on stimulation polarity as well as the orientation and position of the neurons with respect to the electrode. In addition, the patterns and spatial extent of activation were influenced by the geometry of the cortex and surrounding layers, the dimensions of the electrodes, and the positioning of the lead. In vivo thresholds for evoking motor responses were dependent on electrode location and stimulation polarity, and bipolar thresholds were often different from monopolar thresholds through the respective anode and cathode individually. The effects of stimulation polarity and electrode location on thresholds for evoking motor responses paralleled results of the computational model. Experimental evidence of indirect effects of ECS, mediated by synaptic interactions between neural elements, revealed an opportunity for further development of the computational model. The outcome of this dissertation is an improved understanding of the factors that influence the effects of ECS on cortical neurons, and this knowledge will help facilitate the rational implantation and programming of ECS systems.