Melancholy Sites: The Affective Politics of Marginality in Post-Anpo Japan (1960-1970) 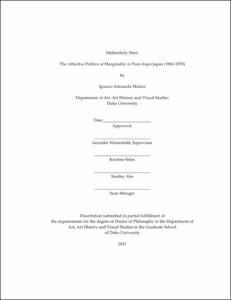 This dissertation examines the intersection of experimental art, literature, performance, photography, and architecture, as Japanese artists and intellectuals grappled with political disillusionment after the end of the protests against the ratification of the U.S.-Japan Security Treaty of 1960. I focus on the work of the sculptors Miki Tomio and Kudo Tetsumi; photographs of late 1960s protests by Tomatsu Shomei and the self-portraits of the novelist Mishima Yukio; the collaboration between photographer Hosoe Eikoh and butoh dance founder Hijikata Tatsumi in the photo album <italic>Kamaitachi</italic> (The Sickle-Weasel, 1969); and depictions of the urban periphery in Hosoe's unfinished <italic>Private Landscape</italic> series (1970-) and the visionary urban planning of the architect Tange Kenzo. All shared an interest in portraying peripheral spaces, the detritus of the everyday, and the sexually perverse, cultivating a rhetoric of marginality that allowed them to explore their ambivalent feelings towards post-Anpo Japan.