Vascular Influence During Patterning and Differentiation of the Gonad 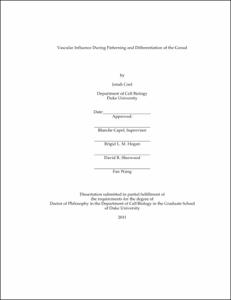 The gonad is a unique primordial organ that retains the ability to adopt one of two morphological fates through much of mammalian embryonic development. Previous work in our lab found that dimorphic vascular remodeling was one of the earliest steps during sex-specific morphogenesis. In particular, vessels in XY gonads display highly ordered behavior that coincides with testis cord formation. It was unknown how the vasculature may influence testis cord morphogenesis and, if so, how this was mechanistically related to sex determination. The work in this thesis addresses a single over-arching hypothesis: Male-specific vascular remodeling is required for testis morphogenesis and orchestrates differentiation of the XY gonad.

To address this question we have modified and developed techniques that allow us to isolate aspects of vascular behavior, gene expression, and endothelial influence on surrounding cells. In particular, the application of live imaging was instrumental to understanding the behavior of various gonadal cell-types in relation to remodeling vessels. It is difficult to grasp the complexity of an organ without understanding the dynamics of its constituents. A critical aim of my work was to identify specific inhibitors of the vasculature that do not affect the early stages of sex determination. Combining inhibitors, live imaging, cell sorting, qRT-PCR, mouse models, and whole organ culture has led to a far richer understanding of how the vasculature behaves and the cell-types that mediate its influence on organ morphogenesis. The beauty of our system is that we do not have to settle for a snapshot of the fate of cells in vivo, but can document their journeys and their acquaintances along the way.

Vascular migration is required for testis cord morphogenesis. Specific inhibitors revealed that in the absence of vessels, testis cords do not form. The work below shows that vessels establish a feedback loop with mesenchymal cells that results in both endothelial migration and subsequent mesenchymal proliferation. Interstitial control of testis morphogenesis is a new model within the field. The mechanisms regulating this process include Vegf mediated vascular remodeling, Pdgf induced proliferation, and Wnt repression of coordinated endothelial-mesenchymal dynamics. Our work also suggests that vascular patterning underlies testis patterning and, again, is mediated by signals within the interstitial space not within testis cords themselves.

A final aspect of my work has been focused on how vessels continue to influence morphology of the testis and the fate of surrounding cells. Jennifer Brennan, a graduate student in our lab, previously showed that loss of Pdgfr&#945; antagonizes cord formation and development of male-specific lineages. The mechanisms and cell-types related to this defect were not clear. I began to reanalyze Pdgfr&#945; mutants after finding remarkable similarity to gonads after vascular inhibition. This work is providing data suggesting that vessels are not simply responsible for testis morphology but also for the fate of specialized cells within the testis. On the whole, this thesis describes specific roles for endothelial cells during gonad development and mechanisms by which they are regulated.