Cosmopolitan and Vernacular Modernism: State, Self and Style in Four Authors 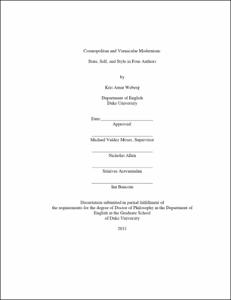 This study examines Irish modernist literature in order to complicate established critical modes which read modernist movements as reflective of distinctly vernacular or cosmopolitan aesthetic and political commitments. I argue that neither recent models of vernacular modernism nor older models of cosmopolitan modernism entirely account for the stylistic innovations and formal experiments of modernist literature. Instead, modernist writers negotiate a field of tension between the poles of cosmopolitan and vernacular, and demonstrate that their works represent forms of identity that accommodate elements of both national belonging and cosmopolitan individualism.

Examining works by four authors - William Butler Yeats, Elizabeth Bowen, Samuel Beckett, and Raymond Queneau - this project argues that modernist literature represents a set of idiosyncratic, dynamic efforts to negotiate the tensions between the limits of the nation-state system and a variety of emerging transnational modes of cultural exchange in the late nineteenth and early twentieth centuries. The nature of modernist writers' efforts to negotiate a period of passage between national and global systems of exchange is, I think, especially visible in the case of Irish modernism. Ireland's transition from a part of the United Kingdom to an independent nation-state in the interwar period makes that nation's literature an exemplary case for my argument, as does the critical importance of Irish writing in the modernist canon.

By examining these and other critical and historical perspectives alongside a sampling of plays, novels, short stories, and memoirs, this study makes the case that modernist literary aesthetics spring from writers' efforts to make sense of competing desires for national belonging and cosmopolitan autonomy. Focusing on works that cross categorical boundaries between Irish and cosmopolitan modernism, this study traces the ways in which modernist aesthetics construct dynamic, adaptive relationships between the global and the national, and suggest that we can imagine them as something other than static, exclusive alternatives.