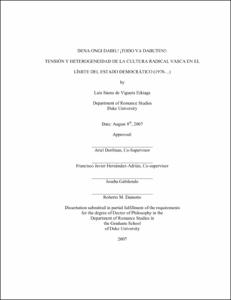 View / Download
1.3 Mb
Date
Author
Saenz de Viguera Erkiaga, Luis
Advisors
Dorfman, Ariel
Hernández-Adrián, Francisco Javier
Repository Usage Stats
702
views
3,512
downloads
Abstract
This dissertation examines the ways in which a youth radical culture developed in the Basque Country after the Spanish Transition from Francoism to a democratic state in the late seventies and early eighties. In the midst of a conflict between national hegemonies, Basque Radical Culture emerges as an exodus away from that hegemonic struggle without an abandonment of politics (such as other youth "movidas" proposed in the Spanish State at the time). On the contrary, Basque radical youths, through self-organization and opposition to hegemonic mores, created a space on the edge of the social matrix defined by two competing legitimacies: Basque Nationalism and the celebratory discourse of the Democratic Spanish State. The main questions I address are how to approach a phenomenon that is imbued with the effects and affects of conflicting accounts of the nation; how radical culture subverts the totalizing tendencies of hegemonic narratives; and, finally, how radical culture operates as a limit of society that dispels the triumphant historical accounts of the Spanish Transition, yet also confronts Basque Nationalism and its contradictions. As an edge of the social space, Basque Radical Culture will engage with the ruins of both Spanish Democracy and Basque Nationalism at the time of Globalization. Since Basque Radical Culture has the effect of mobilizing repressive apparatuses of both the State and the Basque Autonomous regional government, the processes that criminalize radical culture will illustrate how political institutions try to eliminate any exception that neutralizes their illusions of hegemony, thus undermining the democratic quality of the political system. I will analyze these problems through a theoretical approach and a variety of music, occupations of public space, stories and histories that, rather than maintaining the political overdetermination of Basque social space, propose a critique of how that determination works in order to maintain the social fantasies of Basque Nationalism and Spanish Statalism. I will study heterogeneous objects such as punk rock music, alternative culture memoirs, and the occupation of public space in order to reconstruct a radical politics outside hegemonic struggles to gain control of institutional politics.
Type
Dissertation
Department
Literature
Subject
Literature, Romance
Basque Culture
Spanish Transition
Basque Radicalism
Cultural Studies
Permalink
https://hdl.handle.net/10161/390
Citation
Saenz de Viguera Erkiaga, Luis (2007). Dena Ongi Dabil! ¡Todo Va Dabuten!: TensiÓN Y Heterogeneidad De La Cultura Radical Vasca En El LÍMite Del Estado DemocrÁTico (1978-...). Dissertation, Duke University. Retrieved from https://hdl.handle.net/10161/390.
Collections
More Info
Show full item record