The Persistence of Smoke: Opera in One Act, Libretto by John Justice 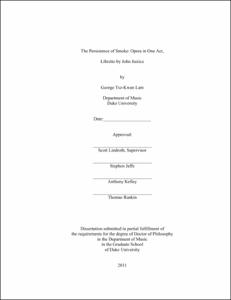 <italic>The Persistence of Smoke</italic> is a documentary opera. The libretto is based on interviews with various individuals related to the former Liggett and Myers Tobacco Company headquarters in Durham, North Carolina.

The cigarette industry once dominated Durham, but saw its decline in the 1990s as the link between cancer and smoking became increasingly clear. The American Tobacco Company and the Liggett and Myers Tobacco Company were once the biggest cigarette manufacturers in the city. As these companies left Durham, their factories and tobacco warehouses first sat vacant, but were gradually preserved and transformed into new spaces for offices, apartments and restaurants.

This project focused on the former Liggett and Myers headquarters along Main Street, a collection of buildings now known as "West Village". I interviewed current and former Durham residents who had a connection with these buildings, including local business representatives, community leaders, former Liggett employees, historians, current residents in the downtown area, municipal urban planners, journalists, and an architect. These interviews were given to local playwright John Justice, who created a libretto based on the themes that emerged.

The opera's story focuses on Kevin, an architect about to unveil his visionary master plan for redeveloping several defunct cigarette factories in an unnamed city. As Kevin leaves his newly renovated apartment for the press conference, he is confronted by his estranged father Curtis, a former cigarette worker who desperately wants to reconcile and reconnect, deliriously recalling the glory days of tobacco and the money that followed.