Endogenous Growth, Trade, and the Environment 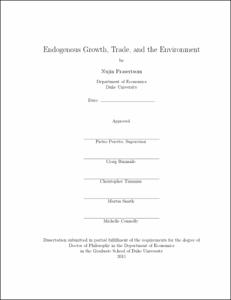 model of endogenous growth driven by horizontal and vertical innovation in the closed economy.

The model is tractable in that it yields a complete, analytical characterization

of the path of utility and the associated welfare level. This property

is exploited to compare two cases of renewable resource management:

property problem in which agents ignore the long-term resource viability;

the second fully internalizes the dynamics of the resource stock.

Analysis shows that if the natural regeneration rate of the renewable

resource is too low, the tragedy of the commons occurs. If, instead,

the natural regeneration rate is sufficiently high, the steady-state

growth rate of the economy is identical across the two management

regimes. The reason is because there is no scale effect; that is,

labor or the resource endowment. However, the development path on

management regime. In particular, a developing economy under full

property rights will cross its development threshold prior to one

under open access. This threshold depends on the size of the manufacturing

firms. When it becomes sufficiently large as a result of the decline

in the number of firms over time, there will be an incentive for the

remaining firms to conduct R\&D. Given the same number of manufacturing

firms, the firm size is larger under full property rights than under

open access due to higher nominal expenditure per capita. Therefore,

the development threshold will be reached sooner under full property

rights. In other words, the economy will start engaging in R\&D activities

sooner and more quickly accumulate knowledge, which is the source

to open access is welfare reducing due to two effects. The first is

through the price of the harvest good. Although the economy initially

as the resource becomes scarcer. Secondly, the competitive household

instantaneously loses the resource income and thus spends less on

rights. The economy therefore experiences a cumulative loss of TFP

relative to the baseline, which is the novel feature of our model

of endogenous innovation. This mechanism has interesting and wide-ranging

implications for the role of resources in development and growth

The second essay extends the model of endogenous growth and renewable

resources into the open economy framework. The paper examines the effect of trade liberalization on resource-rich

countries, based on a two-country model in which the difference in

endowment of a renewable resource leads to asymmetric trade. In this

model, the resource-rich economy trades its harvest good and final

good for the final good from the resource-poor economy. Furthermore,

the renewable resource is considered to be under open access, where

there is no clear ownership over the resource, leading to overexploitation.

Long-term productivity, in this case, stems from endogenously-determined

that the resource-rich country will lose from trade due to two effects.

The first effect is the instantaneous loss of income. Higher demand

for the harvest good, from the combined domestic and international

demand, diverts labor away from the production of technological goods

to the harvest sector, where rent is zero. The second effect is a

scarcity effect, which becomes more severe when trade results in a

greater demand for the harvest good. Overexploitation of the renewable

resource today leads to falling resource stock in the future, which

is then reflected in the higher price of harvest good, other things

being constant. Since the harvest good is an essential input to produce

the final good, given the same amount of the other inputs, the amount

of final good produced will also fall in the long run.