Causes and Consequences of Recombination Rate Variation in Drosophila 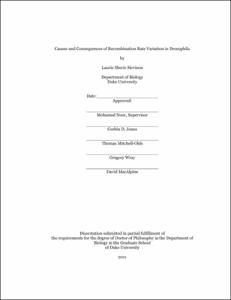 Next, I looked at the role of chromosomal inversions in species maintenance by examining the impact of inversions distinguishing species to disrupt recombination rates within inverted regions, at inversion boundaries and throughout the remainder of the genome. By screening nearly 10,000 offspring from females heterozygous for 3 major inversions, I observed recombination rates within an inverted region in hybrids between Drosophila pseudoobscura and D. persimilis to be ~10-4 (similar to rates of exchange for inversion heterozygotes within species). However, despite the apparent potential for exchange, I do not find empirical evidence of ongoing gene exchange within the largest of 3 major inversions in DNA sequence analyses of strains isolated from natural populations. Finally, I observe a strong 'interchromosomal effect' with up to 9-fold higher (>800% different) recombination rates along collinear segments of chromosome 2 in hybrids, revealing a significantly negative association between interchromosomal effect and recombination rate in homokaryotypes, and I show that interspecies nucleotide divergence is lower in regions with larger changes in recombination rates in hybrids, potentially resulting from greater interspecies exchange. This last result suggests an effect of chromosomal inversions on interspecies gene exchange not considered previously.

Overall, my map of fine-scale recombination rates allowed me to confirm findings of broader-scale studies and identify multiple novel features that merit further investigation. Furthermore, I have identified several similarities and differences between inversions segregating within vs. between species in their effects on recombination and divergence, and I have identified possible effects of inversions on interspecies gene exchange that had not been considered previously. Finally, I have provided some evidence that males may impact female recombination rates, although future work should attempt to explore the range of male differences that impact this trait and the mechanism through which males impact the outcome of female meiosis.