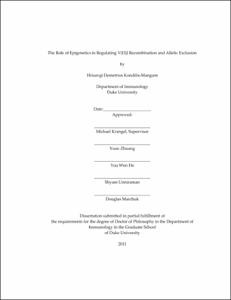 The nucleosome can positively and negatively regulate V(D)J recombination. Therefore, we defined the in vivo nucleosome organization of accessible and inaccessible RSSs on the Tcr loci. We used Tcrb and Tcra alleles which lack various cis-elements (e.g. enhancers and promoters) and terminate transcription. By comparing nucleosome organization and histone octamer occupancy, we found that accessible alleles are characterized by lower histone octamer occupancy and in some cases movement of nucleosomes. Also, we found that some these changes are mediated by transcription through the RSS. We concluded that one mechanism by which cis-elements epigenetically regulate RSS accessibility is by histone octamer loss and nucleosome repositioning and that some of these changes are mediated by transcription.