The Drosophila Gustatory Receptor Genes: the Molecular Basis of Taste Perception and Coding 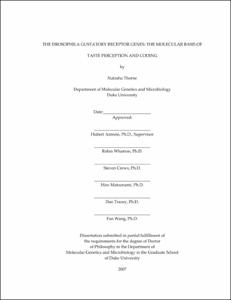 View / Download
4.6 Mb
Date
Author
Thorne, Natasha
Advisor
Amrein, Hubert
Repository Usage Stats
441
views
827
downloads
Abstract
Discrimination between edible and contaminated foods is crucial for the survival of animals. In Drosophila, a family of gustatory receptors (GRs) expressed in taste neurons is thought to mediate the recognition of sugars and bitter compounds, thereby controlling feeding behavior. Using the Gal4/UAS system, we have characterized the expression of Gr genes in detail, and find that gene expression falls into two distinct groups. The first group, which make up the majority of the genes analyzed, are co-expressed with Gr66a, and functional ablation of taste neurons expressing these genes demonstrates that these neurons mediate sensitivity to bitter substrates. A second, distinct group of taste neurons, express Gr5a and mediate sensitivity to trehalose. We find that these two sub-populations of taste neurons - attractive-type and avoidance-type - project afferents to discrete areas of the primary taste center in the CNS. These results demonstrate how bitter and sweet taste are coded for in the periphery and indicates that information about different taste modalities is initially segregated in the CNS. We have also used the Gal4/UAS system to thoroughly characterize the expression profile of a cluster of six Grs - Gr28a and Gr28b.a-b.e. We find that these receptors are expressed not only in taste neurons, but other sensory neurons, as well as neurons in the CNS. RNA in situ hybridization confirms this unusual expression pattern. In order to explore the function of these Grs, these genes have been deleted using ends-out homologous recombination, to produce Gr28 mutant flies. Initial behavioral experiments with Gr28 mutant flies suggest that these receptors may play a role in detecting aversive substrates and/or modulate avoidance responses to these substrates.
Type
Dissertation
Department
Genetics and Genomics
Subject
Biology, Neuroscience
Biology, Genetics
taste
Drosophila
gustatory receptors
behavior
chemosensory
Permalink
https://hdl.handle.net/10161/392
Citation
Thorne, Natasha (2007). The Drosophila Gustatory Receptor Genes: the Molecular Basis of Taste Perception and Coding. Dissertation, Duke University. Retrieved from https://hdl.handle.net/10161/392.
Collections
More Info
Show full item record