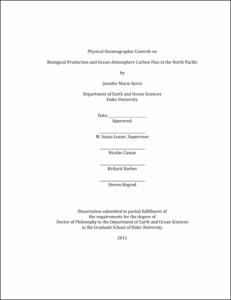 This dissertation identifies and quantifies the impact of processes driving two biogeochemical phenomena of interest by considering them in the context of the large-scale circulation in which they occur. Both processes occur in the North Pacific transition zone (NPTZ), a basin-wide region near the subpolar-subtropical gyre boundary.

First, this work investigates the physical forcing behind the large seasonal variability in the location of the Transition zone chlorophyll front (TZCF). The TZCF is a persistent gradient in sea surface color that separates high chlorophyll waters to the north from low chlorophyll waters to the south. The chlorophyll front shifts seasonally by about 1000 km, oscillating between its southernmost winter latitude and its northernmost summer latitude. The forcing behind this seasonal signal is of interest because a number of migratory marine animals, both commercial and endangered, appear to track it.

This first study finds that vertical processes, traditionally viewed as controlling the dynamical supply of nutrients to surface waters, are insufficient to explain seasonal variations in nutrient supply to the transition zone. Instead, the wind-driven horizontal Ekman transport of nutrients, moving southward from the subpolar gyre into the northern reaches of the subtropical gyre, drives the southward migration of the TZCF. Such lateral transport of nitrate supports up to 40% of new primary productivity in the region annually, and nearly all of new primary productivity in the winter.

Second, this work investigates why the North Pacific transition zone waters are a notably strong sink for atmospheric carbon dioxide (CO2) on a mean annual basis, while seasonally they vary from a sink in the winter to a neutral to weak source in the summer. As the partial pressure of carbon dioxide (pCO2) in the surface mixed layer exerts primary control on the direction and magnitude of air-sea carbon exchange, this study quantifies the impact of processes regulating seawater pCO2: temperature, salinity, advection of dissolved inorganic carbon (DIC) and alkalinity (ALK), mixing of DIC and ALK, biology, and air-sea carbon flux.

Seasonal controls on pCO2 in the North Pacific transition zone differ from annual controls. Temperature effects dominate the seasonal signal, but are partially countered throughout the year by opposing processes. In spring and summer, biological drawdown partially offsets the increase in pCO2 due to warming waters; in fall and winter, the vertical entrainment of carbon moderates the decrease in pCO2 due to cooling waters. On a mean annual basis, air-sea carbon flux, biology, mixing, and advection all have a net impact on seawater pCO2. Though important seasonally, temperature has a small impact on pCO2 and air-sea carbon flux annually, accounting for only about 15-20% of oceanic carbon uptake through temperature-driven solubility changes.

This second study again finds an important role for lateral processes to play in regulating biogeochemical phenomena in the North Pacific transition zone. The ability of the region to uptake atmospheric carbon year after year is maintained by those processes exporting carbon from its surface waters: the vertical export of organic carbon to depth, and the lateral geostrophic advection of carbon out of the region. This lateral advection alone determines the location of the sink region: of the processes impacting seawater pCO2 on a mean annual basis, only the geostrophic divergence of DIC disproportionately lowers pCO2 in the transition zone latitudes, supporting greater atmospheric CO2 uptake here than in surrounding regions.

This dissertation identifies and quantifies processes driving biogeochemical features in the North Pacific transition zone, finding the large-scale circulation in the region plays a significant role in regulating these processes. The unique physical oceanographic characteristics of the NPTZ, and in particular the lateral transport, support biological and chemical attributes notably distinct from adjacent waters.