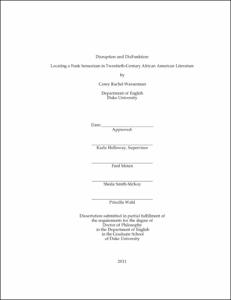 This dissertation examines the way in which funk music, in the context of twentieth century African American literature, operates as a means of stimulating the sensorium. Funk, narrowly defined as a musical form, once carried negative connotations. Whether understood as depression, a genre of popular music, an odor, or as a euphemism for sex, the genre is concerned with attitude and visible emotions. Much work has been done in the field of African American literature regarding jazz and blues, and studies of hip-hop are gaining traction. Funk, however, has not fulfilled its potential for investigating its affect of musical performance or its connection to narratives. This project is an examination of the aesthetics of this musical form, which will generate more nuanced readings of musical and literary narratives of the 1960s and 1970s through an analysis of sound and its sensorial variants. I examine the function of music in a literary text as opposed to how it is described.

Funk operates as a link between the jazz- and blues-inspired poetry and novels of the early twentieth century on the one hand and the emergence of "urban," "street," or "hip-hop" narratives on the other. Its artistic intervention in social relationships brings the aesthetic and political into conversation. I argue against the binary differentiating "serious" and "popular" musical forms; funk bridges the gap between these two designations in an important context, which creates a sonic and social space to examine the idea of difference both in terms of the general and the specific. A misconception of "sameness" is the site of theoretical and ontological difference or disruption.

Funk's ability to disrupt resides in its paradoxical nature. Rhythmically, the musical genre departs from soul of the 1960s and is fundamental to the development of hip-hop in the late-1970s and early 1980s. Though rooted in distinct rhythmic patterns, Funk seeks to dismantle conceptions of rhythmic expectation and production common in popular music by pushing back against previously popular forms. Prior to Funk's popularity, most musical forms ranging from jazz to rock and roll emphasized the second and fourth beats in a measure. Funk compositions typically emphasize the first and third beats, which changes the momentum of the music. Though it is a genre geared towards dance and therefore rooted in the body and movement, Funk gravitates towards transcending the physical limits of the body by addressing discourses of sensorial perception. Funk (both as a musical genre and an aesthetic) is something of sensory ensemble--each sense a part of the whole, complex experience. The five senses are brought together in an all-out attack on what hegemony comes to represent. Each chapter presents a different mode of assault on the body's ability to process the sensorium. I demonstrate the way Funk disrupts through a fusion of ethnomusicology, socio-cultural analysis, and literary criticism in the act of reading, hearing, watching, smelling, and tasting musical performances, cultural events, and works of literature.