Neuroeconomics of Reward Information and Motivation 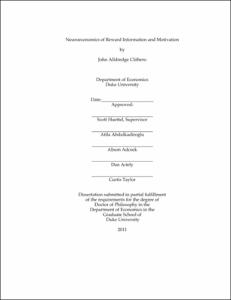 Humans must integrate information to make decisions. This thesis is concerned with studying neural mechanisms of decision making, and combines tools from economics, psychology, and neuroscience. I employ a neuroeconomic approach to understand the processing of reward information and motivation in the brain, utilizing neural data from functional magnetic resonance imaging (fMRI) to make connections between cognitive neuroscience and economics.

Chapter 1 lays the groundwork for the thesis and provides background on neuroscience, fMRI, and neuroeconomics. Chapter 2 sketches the central challenges of using neuroscience to address economic questions. The first half of the chapter discusses familiar arguments against the integration of neuroscience and economics: behavioral sufficiency and emergent phenomenon. The second half constructs principles for interdisciplinary research linking mechanistic (neuroscience) data to behavioral (economic) phenomena: mechanistic convergence across experiments and biological plausibility in models.

Chapter 5 employs a reward anticipation task to measure variation in relative motivation without observing choices between rewards (money and candy). A reaction-time index captures individual differences in motivation, and heterogeneity in this index maps onto variability in two brain regions: nucleus accumbens and anterior insula. Further, the nucleus accumbens activation mediates the predictive effects of anterior insula. These results show that idiosyncrasies in reward efficacy persist in the absence of a choice environment.

Chapters 6 and 7 conclude the thesis. Chapter 6 complements discussions of neuroeconomics with text analysis of an exhaustive corpus from top economics journals and references from a large set of review articles. The analysis shows a mismatch between topics of importance to economics and prominent concepts in neuroeconomics. I show how neuroeconomics can grow by employing cognitive neuroscience to identify biologically plausible and generalizable models of a broader class of behaviors.