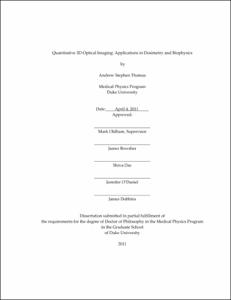 Optical-CT has been shown to be a potentially useful imaging tool for for the two very different spheres of biologists and radiation therapy physicists, but it has yet to live up to that potential. In radiation therapy, researchers have used optical-CT for the readout of 3D dosimeters, but it is yet to be a clinically relevant tool as the technology is too slow to be considered practical. Biologists have used the technique for structural imaging, but have struggled with emission tomography as the reality of photon attenuation for both excitation and emission have made the images quantitatively irrelevant.

<bold>Dosimetry.</bold> The DLOS (Duke Large field of view Optical-CT Scanner) was designed and constructed to make 3D dosimetry utilizing optical-CT a fast and practical tool while maintaining the accuracy of readout of the previous, slower readout technologies. Upon construction/optimization/implementation of several components including a diffuser, band pass filter, registration mount & fluid filtration system the dosimetry system provides high quality data comparable to or exceeding that of commercial products. In addition, a stray light correction algorithm was tested and implemented. The DLOS in combination with the 3D dosimeter it was designed for, PREAGETM, then underwent rigorous commissioning and benchmarking tests validating its performance against gold standard data including a set of 6 irradiations.

DLOS commissioning tests resulted in sub-mm isotropic spatial resolution (MTF >0.5 for frequencies of 1.5lp/mm) and a dynamic range of ~60dB . Flood field uniformity was 10% and stable after 45minutes. Stray light proved to be small, due to telecentricity, but even the residual can be removed through deconvolution. Benchmarking tests showed the mean 3D passing gamma rate (3%, 3mm, 5% dose threshold) over the 6 benchmark data sets was 97.3% ± 0.6% (range 96%-98%) scans totaling ~10 minutes, indicating excellent ability to perform 3D dosimetry while improving the speed of readout. Noise was low at ~2% for 2mm reconstructions. The DLOS/PRESAGE® benchmark tests show consistently excellent performance, with very good agreement to simple known distributions. The telecentric design was critical to enabling fast (~15mins) imaging with minimal stray light artifacts. The system produces accurate isotropic 2mm3 dose data over clinical volumes (e.g. 16cm diameter phantoms, 12 cm height), and represents a uniquely useful and versatile new tool for commissioning complex radiotherapy techniques. The system also has wide versatility, and has successfully been used in preliminary tests with protons and with kV irradiations.

<bold>Biology.</bold> Attenuation corrections for optical-emission-CT were done by modeling physical parameters in the imaging setup within the framework of an ordered subset expectation maximum (OSEM) iterative reconstruction algorithm. This process has a well documented history in single photon emission computed tomography (SPECT), but is inherently simpler due to the lack of excitation photons to account for. Excitation source strength distribution, excitation and emission attenuation were modeled. The accuracy of the correction was investigated by imaging phantoms containing known distributions of attenuation and fluorophores. The correction was validated on a manufactured phantom designed to give uniform emission in a central cuboidal region and later applied to a cleared mouse brain with GFP (green-fluorescent-protein) labeled vasculature and a cleared 4T1 xenograft flank tumor with constitutive RFP (red-fluorescent-protein). Reconstructions were compared to corresponding slices imaged with a fluorescent dissection microscope.

Significant optical-ECT attenuation artifacts were observed in the uncorrected phantom images and appeared up to 80% less intense than the verification image in the central region. The corrected phantom images showed excellent agreement with the verification image with only slight variations. The corrected tissue sample reconstructions showed general agreement between the verification images. Comprehensive modeling in optical-ECT imaging was successfully implemented, creating quantitatively accurate 3D fluorophore distributions. This work represents the 1st successful attempt encompassing such a complete set of corrections. This method provides a means to accurately obtain 3D fluorophore distributions with the potential to better understand tumor biology and treatment responses.