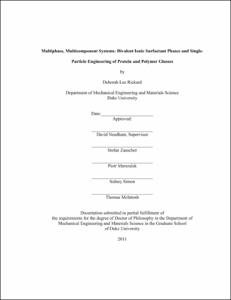 This thesis presents an analysis of the material properties and phase behavior of divalent ionic surfactant salts, and protein and polymer glasses. There has been extensive interest in understanding the phase behavior of divalent ionic surfactants due to the many applications of ionic surfactants in which they come into contact with divalent ions, such as detergency, oil recovery, and surfactant separation processes. One goal of determining the phase boundaries was to explore the option of incorporating a hydrophobic molecule into the solid phase through the micelle-to-crystal bilayer transition, either for drug delivery applications (with a biologically compatible surfactant) or for the purpose of studying the hydrophobic molecule itself. The liquid micellar and solid crystal phases of the alkaline earth metal dodecyl sulfates were investigated using calorimetry, visual inspection, solubilization of a fluorescent probe, and x-ray diffraction. The Krafft temperature and dissolution enthalpy were determined for each surfactant, and partial composition-temperature phase diagrams of magnesium dodecyl sulfate-water, calcium dodecyl sulfate-water, as well as sodium dodecyl sulfate with MgCl2 and CaCl2 are presented. As a proof of concept, fluorescence microscopy images showed that it is, in fact, possible to incorporate a small hydrophobic molecule, diphenylhexatriene, into the solid phase.

The second, and main, part of this thesis expands on work done previously in the lab by using the micropipette technique to study two-phase microsystems. These microsystems consist of a liquid droplet suspended in a second, immiscible liquid medium, and can serve as direct single-particle studies of drug delivery systems that are formed using solvent extraction (e.g., protein encapsulated in a biodegradable polymer), and as model systems with which to study the materials and principles that govern particle formation. The assumptions of the Epstein-Plesset model, which predicts the rate of droplet dissolution, are examined in the context of the micropipette technique. A modification to the model is presented that accounts for the effect a solute has on the dissolution rate. The modification is based on the assumption that the droplet interface is in local thermodynamic equilibrium, and that the water activity in a solution droplet can be used to determine its dissolution (or dehydration) rate. The model successfully predicts the dissolution rates of NaCl solutions into octanol and butyl acetate up to the point of NaCl crystallization. The dehydration of protein solutions (lysozyme or bovine serum albumin) results in glassified microbeads with less than a monolayer of water coverage per protein molecule, which can be controlled by the water activity of the surrounding organic medium. The kinetics of dehydration match the prediction of the activity-based model, and it is shown how the micropipette technique can be used to study the effect of dissolution rate on final particle morphology. By using a stable protein with a simple geometry (lyosyzme), this technique was be used to determine the distance dependence of protein-protein interactions in the range of 2-25 &Aring;, providing the first calculation of the hydration pressure decay length for globular proteins. The distance-dependence of the interaction potential at distances less than 9 &Aring; was found to have a decay length of 1.7 &Aring;, which is consistent with the known decay length of hydration pressure between other biological materials. Biodegradable polyesters, such as poly(lactide-co-glycolide) (PLGA), are some of the most common materials used for the encapsulation of therapeutics in microspheres for long-term drug release. Since they degrade by hydrolysis, release rates depend on water uptake, which can be affected by processing parameters and the material properties of the encapsulated drug. The micropipette technique allows observations not possible on any bulk preparation method. Single-particle observations of microsphere formation (organic solvent extraction into a surrounding aqueous phase) show that as solvent leaves the microsphere and the water concentration in the polymer matrix becomes supersaturated, water phase separates and inclusions initially grow quickly. Once the concentration in the polymer matrix equilibrates with the surrounding aqueous medium, the water inclusions continue to grow due to dissolved impurities, solvent, and/or water-soluble polymer fragments resulting from hydrolysis, all of which locally lower the water activity in the inclusion. Experiments are also presented in which glassified protein microbeads were suspended in PLGA solution prior to forming the single microspheres. This technique allowed the concentration of protein in a single microbead/inclusion to be determined as a function of time.