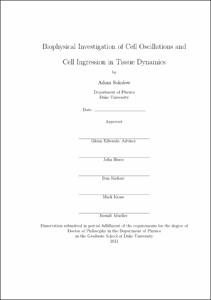 Embryonic development involves a precisely orchestrated interplay between gene expression, tissue movement and cell-shape changes. Using time-lapsed <italic>in vivo</italic> confocal microscopy we investigate the time-dependence of cell-shape changes for essentially all of the cells in the amnioserosa tissue during the early-to-late stages of dorsal closure in <italic>Drosophila melanogaster</italic>. Dorsal closure is a critical stage during embryogenesis, where two epidermal tissues are brought together by the force producing machinery in the surrounding tissues, including the amnioserosa tissue. The environment these cells exist in is dominated by viscous forces, making the observable kinematics the result of active contractile force imbalances along the cell peripheries. Our image contrast is due to GFP-DE-cadherin, a relatively bright fluorescent construct that localizes at cell-cell junctions. Using custom written segmentation software we quantify cell apical areas from confocal images. By considering the kinematics of individual cells we investigate the forces produced by the amnioserosa tissue. We confirm previous observations of area pulsations or oscillations and that, within the dorsal opening, areas of peripheral amnioserosa cells are smaller than the areas of interior cells [Fernandez et al., 2007, Gorfinkiel et al., 2009, Solon et al., 2009, Blanchard et al., 2010]. In addition to oscillations, we find that cells in the low-Reynolds environment of the amnioserosa tissue exhibit ingression processes, a persistent loss of apical area resulting in the internalization of the cell. We develop an empirical model that quantifies the kinematics of the ingression processes of a substantial fraction of the amnioserosa cells. We also account for these observations with a biophysical model that quantifies the (spatially averaged) net force from experimental data and explicitly treats the dynamics of oscillations and ingression. Utilizing both models, we find that approximately half of the amnioserosa cells exhibit a loss of apical cross-sectional area dominated by an irreversible ingression process. For these cells, a transition is resolved from largely reversible oscillations to the onset of an ingression process. We also investigate variability in cell kinematics according to location within the dorsal opening and we find that cells ingress along each leading edge, in addition to previously observed ingression associated with the zipping process or associated with apoptosis. We attribute cell-to-cell variability in the maximum rate of constriction during the ingression processes to be a consequence of variability in the magnitude of force produced by the cytoskeleton. Finally, we investigate invariant properties, i.e., time-independent, global properties of dorsal closure and find nearly constant rates of completion of ingression processes as well as a constant of proportionality that relates the area of the dorsal opening to its two principle axes.