Phenotypic and Genetic Diversity in the Sea Urchin Lytechinus Variegatus 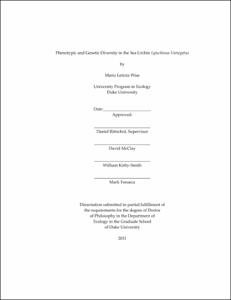 Diversity in coloration is a common phenomenon in marine invertebrates, although the ecological significance of the diversity is often unknown. Patterns of geographic variability, particularly with respect to color phenotypes, are evident in many organisms and may provide visual evidence of natural selection.

This dissertation examined the geographic and genetic variability of color patterns and morphology of the sea urchin <italic>Lytechinus variegatus </italic>. This study had 3 objectives: 1) to describe and quantify phenotypic diversity--color and morphology--throughout the geographic range; 2) to determine the heritability of color in genetic crosses between individuals with similar and differing phenotype; 3) to assess the degree of genetic divergence between and within the regions and congruence between the phylogenetic mitochondrial COI data and color phenotypes seen in the field.

The distribution of color phenotypes in the field is highly variable across the geographic range which stretches from Beaufort NC to southern Brazil and throughout the Gulf of Mexico and Caribbean. Urchins in each of the 5 regions sampled (Beaufort, Gulf, Keys, Panama and Brazil) have a distinct phenotypic composition despite the presence of similar color morphs. The two regions at the extremes--Beaufort and Brazil--demonstrate the most homogeneous phenotypes, each with a single dominant color morph. The Keys has the most heterogeneous composition with all 14 color morphs present. Morphological diversity mirrors color diversity in being highly variable across the range. Urchins in Beaufort are significantly different morphologically from urchins in the central portion of the range, with thicker, flatter tests and longer more robust spines.

The heritability of color phenotypes and morphology suggests that genes rather than environment have a major role in color phenotype and patterning as well as morphology in test, spines and lanterns. F1 and F2 offspring of Beaufort and Tavernier Key crosses resemble the parental phenotypes in both morphology and color phenotype. Hybrids from crosses between regions have a mixed color palette and intermediate morphological characteristics. The crosses establish that in <italic>L. variegatus </italic>the white phenotype is a dominant autosomal trait and green and purple are recessive and co-expressed. Patterning of the test and spines is dominant to non-patterning.

Analysis of the mitochondrial COI gene in urchins from Beaufort, Gulf and Keys regions revealed two clades. Clade 1 composed exclusively of Keys urchins differed significantly (FST = 0.89, <italic>P</italic> < 0.001) from Clade 2 composed of urchins from Beaufort, Gulf and Keys. Genetic differentiation within Clade 2 was zero, indicating that urchins in these regions are genetically identical. The genetic split between phenotypically indistinguishable Keys urchins suggests cryptic species. Genetic differentiation does not concord with phenotypic and morphological differentiation. No structure was detected with regards to color phenotype in either clade or region of origin in Clade 2.