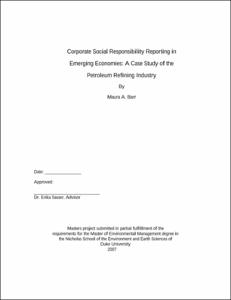 View / Download
597.8 Kb
Date
Author
Barr, Maura
Advisor
Sasser, Erika
Repository Usage Stats
493
views
2,234
downloads
Abstract
A majority of the literature on corporate social responsibility (CSR) reporting focuses on efforts made by companies headquartered in North America and Europe. Nevertheless, many profitable companies from countries with emerging economies are beginning to report on their social and environmental performance. However, the quality of these CSR reports is relatively unknown. Therefore, the purpose of this project is to benchmark six different company’s sustainability reports in order to determine the quality of reporting that exists for companies based in emerging economies. Based on the project’s findings, it will be determined whether or not the initial hypotheses concerning the quality of these companies’ sustainability reports were correct. In order to truly determine the quality of CSR reports of companies from countries with emerging economies, it would be necessary to look at a variety of different sectors. Nevertheless, because of the narrow scope of this project, the analysis will only focus on the petroleum-refining sector. By using the standardized benchmarking system developed by SustainAbility Ltd. and UNEP, a compare and contrast analysis will be conducted of each of the six chosen petroleum-refining companies’ CSR reports. Ultimately, this project seeks to determine the range of CSR reporting quality scores that will be given to these emerging economy ‘reporting leaders.’ This project set out to determine whether or not the CSR reports of publicly traded petroleum-refining companies headquartered in emerging economies would rank higher than the reports of state-owned petroleum refining companies that are also located in emerging economies. This analysis generally supports this hypothesis. In addition, this project also sought to determine whether the data support two other minor hypotheses: (a) that publicly traded companies would include more information on stakeholder engagement processes in their reports than SOEs, and (b) that publicly traded companies would spend an equal amount of effort in describing their social and environmental performance whereas SOEs would focus more on social performance. Results from the case studies support the first minor hypothesis but not the second.
Type
Master's project
Department
Nicholas School of the Environment and Earth Sciences
Subject
Corporate Social Responsibility
Emerging Economies
State-Owned Enterprises
Publicly Traded Companies
Permalink
https://hdl.handle.net/10161/394
Citation
Barr, Maura (2007). Corporate Social Responsibility Reporting in Emerging Economies: A Case Study of the Petroleum Refining Industry. Master's project, Duke University. Retrieved from https://hdl.handle.net/10161/394.
Collections
More Info
Show full item record