A Phylogenetic, Ecological, and Functional Characterization of Non-Photoautotrophic Bacteria in the Lichen Microbiome 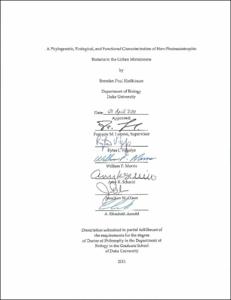 Although common knowledge dictates that the lichen thallus is formed solely by a fungus (mycobiont) that develops a symbiotic relationship with an alga and/or cyanobacterium (photobiont), the non-photoautotrophic bacteria found in lichen microbiomes are increasingly regarded as integral components of lichen thalli and significant players in the ecology and physiology of lichens. Despite recent interest in this topic, the phylogeny, ecology, and function of these bacteria remain largely unknown. The experiments presented in this dissertation employ culture-free methods to examine the bacteria housed in these unique environments to ultimately inform an assessment of their status with regard to the lichen symbiosis. Microbiotic surveys of lichen thalli using new oligonucleotide-primers targeting the 16S SSU rRNA gene (developed as part of this study to target Bacteria, but exclude sequences derived from chloroplasts and Cyanobacteria) revealed the identity of diverse bacterial associates, including members of an undescribed lineage in the order Rhizobiales (Lichen-Associated Rhizobiales 1; `LAR1'). It is shown that the LAR1 bacterial lineage, uniquely associated with lichen thalli, is widespread among lichens formed by distantly related lichen-forming fungi and is found in lichens collected from the tropics to the arctic. Through extensive molecular cloning of the 16S rRNA gene and 454 16S amplicon sequencing, ecological trends were inferred based on mycobiont, photobiont, and geography. The implications for using lichens as microcosms to study larger principles of ecology and evolution are discussed. In addition to phylogenetic and ecological studies of lichen-associated bacterial communities, this dissertation provides a first assessment of the functions performed by these bacteria within the lichen microbiome in nature through 454 sequencing of two different lichen metatranscriptomes (one from a chlorolichen, <italic>Cladonia grayi</italic>, and one from a cyanolichen, <italic>Peltigera praetextata</italic>). Non-photobiont bacterial genes for nitrogen fixation were not detected in the <italic>Cladonia</italic> thallus (even though transcripts of cyanobacterial nitrogen fixation genes from two different pathways were detected in the cyanolichen thallus), implying that the role of nitrogen fixation in the maintenance of chlorolichens might have previously been overstated. Additionally, bacterial polyol dehydrogenases were found to be expressed in chlorolichen thalli (along with fungal polyol dehydrogenases and kinases from the mycobiont), suggesting the potential for bacteria to begin the process of breaking down the fixed carbon compounds secreted by the photobiont for easier metabolism by the mycobiont. This first look at the group of functional genes expressed at the level of transcription provides initial insights into the symbiotic network of interacting genes within the lichen microbiome.