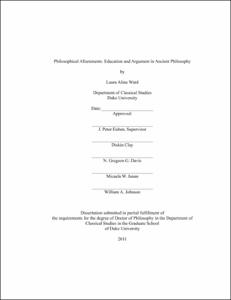 This dissertation investigates how recognition of Plato's <italic>Republic</italic> as a pedagogical text and of the milieu of competing disciplines in which it composed suggests new readings of its philosophical content. I contend that close attention to the cultural context in which the <italic>Republic</italic> was written reveals the degree to which its arguments were constructed not only with an eye towards the philosophical demands put upon it, but also in response to the claims of epistemological authority made by other fields. Furthermore, I show that close attention to the pedagogical function of the text reveals the degree to which Plato relies upon the dialogue's characters and figurative language to entice students away from alternative pursuits and world-views and towards Platonic philosophy.

The <italic>Republic</italic> was constructed in a revolutionary period for both texts and teachers, in which texts were beginning to function as a kind of tutor. In my first chapter, "Educating Athens", I survey the changing Athenian attitudes towards education from the sixth to the fourth centuries BCE, with a special focus on the rise of the concept of paideia. I also consider some of the ways in which earlier scholars have regarded the <italic>Republic</italic> as a prescriptive text on education in order to distinguish their approaches from my own: unlike these earlier readings, my approach to the text is to regard it as itself educating the reader, rather than as describing a system of education. The development of systems of paideia is intimately connected to the phenomena discussed in my second chapter: the rise of disciplines and the explosion of the written word. I conduct a historical survey of the evidence for literacy and texts in the seventh to fourth centuries BCE and show that the gradual increase in texts and literacy did not replace oral culture in Athens, but rather supplemented it. I point out striking similarities among medical texts, oratorical works, and the Socratic dialogues written by Plato's contemporaries as a basis for comparison with Plato's <italic>Republic</italic>.

Ultimately my dissertation demonstrates that by locating the <italic>Republic</italic> within the intersection of competing pedagogies, new disciplines, and the recent rise of texts, the text can be understood as functioning on a number of different levels. It dismisses the merits of other disciplines and privileges Plato over other philosophers, all within the structure of a work which is gradually molding and guiding its reader towards Plato's particular ethical and epistemological system. Although the <italic>Republic</italic> has been read as a work on ethics, on political philosophy, and on psychology, its disparate components and topics coalesce only by reading it first as a work which educates.