"It is Not in a Day That a Man Abandons His Morals and Habits": The Arab Bureau, Land Policy, and the Doineau Trial in French Algeria, 1830-1870 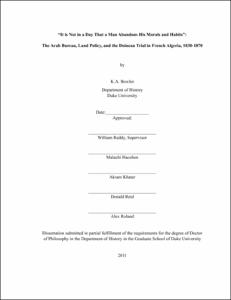 In the Algerian city of Oran in 1857, a French civil court convicted and condemned to death the Captain Auguste-Edouard Doineau, officer of the Arab Bureau, for killing Si-Mohammed-ben-Abdallah, the agha of the Beni-Snouss tribe. The trial generated tremendous public attention The the civilian population in Algeria greeted the verdict with approval, but the military administration viewed it with great dismay. In fact, the intensely negative publicity the Arab Bureau, and the military in general, attracted as a result of this trial produced a significant change in the political structure of the French colonial government in Algeria. In 1858, Napoleon III transformed the administration of Algeria from a division between civilian and military administrative zones to an entirely civilian administration. Traditional accounts of Algerian history overlook or underplay this minor administrative shift. Indeed, the change lasted only two years, because Napoleon III returned power to the military in 1860. Nonetheless, this peculiar and short-lived change, and the circumstances which led to it, illuminate the problems and conflicts that the French faced in the early decades of their rule in Algeria. The trial of Captain Doineau and its resulting backlash illustrates the deep division between the civilian and military administrations in Algeria, a division that historians have overlooked but which held profound effects for the establishment of a thriving French colony.

The roots of this division lie in two major points of conflict between the civilian and military administrative branches: the extent to which the French should adopt or tolerate pre-existing political and social norms and, most important, the process by which Europeans acquired and settled the land belonging to the indigenous population. These issues were informed by post-Revolutionary French political thought and concepts of individual civil liberties. In 1870, the republicans of the Third Republic ended the military administration, the conclusion of decades worth of struggle by the civilian factions in Algeria to end the "rule of the sword." Traditional historical narratives treat this as a triumph for the liberal, republican values proclaimed by the Third Republic and consider a beneficial change for the colony and its inhabitants, both European and indigenous. The military administration, and the Arab Bureau in particular, represented, however, an alternate approach to governing the new colony that failed, ultimately, because it failed to conform to French post-Revolution expectations of what constituted a just and liberal government power. The military and the Arab Bureau advocated a tolerance for and acceptance of local legal and social customs, but the prevailing political culture of nineteenth-century France lacked an ability to accommodate this approach. Moreover, the economic need, and growing colonist demands, for more land for European colonization, accelerated during the 1850s and 1860s, placing financial pressure on the French government to dismantle the local legal and social structures that hindered the process of land appropriation. The French settlers and their supporters in the French civilian administration, in contrast to the Arab Bureau, wanted local practices replaced immediately by French laws and values. The different administrative approaches advocated by the civilian and military administrations, and the significant effect they held for land policy, created tension between these two branches of the French administration in Algeria. These tensions converged in the Doineau Trial of 1857, and the conviction of Captain Doineau initiated the decline of the Arab Bureua's power and its alternate approach toward administering the indigenous population in Algeria.