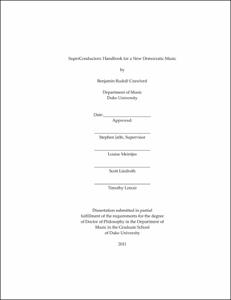 I am interested, broadly, in the relationship of aesthetics to politics. More specifically, I am interested in the importance of aesthetics to leftist political organizing, particularly in regard to music. This interest reflects my goals as a composer and as an activist, or, I should say, as a composer/activist: the project is the same&mdash;musical composition is a large piece of a larger puzzle. <italic>SuperConductors</italic> explores the (structural) relationships between musical objects, their means of production, and the corresponding social formations. I am especially concerned with how formal aspects of a musical composition (which, for me, include the means of performance/consumption) reflect social relations, but more importantly also forge them. So: is there a way for me to write music that challenges dominant/hegemonic social relationships? Is there a way for me to write a more democratic music?

<italic>SuperConductors</italic> consists of three divisions. The introductory division discusses the theoretical background of the project and traces historical lineages of other music and art that have been influential to this project. The second division is comprised by a series of musical compositions devoted to exploring the political and aesthetic possibilities that arise from participatory music-making. The final division consists of an article examining the emergence of web-based interactive music, pieces sometimes dubbed &ldquo;sound toys&rdquo;, as well as a series of my own pieces in this genre.

As a result of my work on this project, I have developed a paradigm for the production of democratic musical works through the discerning implementation of dynamically configurable forms; these principles, designed to facilitate the composition of new works in this style, are codified in a section entitled, &ldquo;Guidelines for a new democratic music&rdquo;.