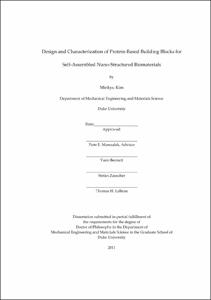 This study is focused on designing and characterizing protein-based building blocks in order to construct self-assembled nano-structured biomaterials. In detail, this research aims to: (1) investigate a new class of proteins that possess nanospring behaviors at a single-molecule level, and utilize these proteins along with currently characterized elastomeric proteins as building blocks for nano-structured biomaterials; (2) develop a new method to accurately measure intermolecular interactions of self-assembling two or more arbitrary (poly)peptides, and select some of them which have appropriate tensile strength for crosslinking the proteins to construct elastomeric biomaterials; (3) construct well-defined protein building blocks which are composed of elastomeric proteins terminated with self-oligomerizing crosslinkers, and characterize self-assembled structures created by the building blocks to determine whether the elasticity of proteins at single-molecule level can be maintained.

Primary experimental methods of this research are (1) atomic force microscope (AFM) based single-molecule force spectroscopy (SMFS) that allows us to manipulate single molecules and to obtain their mechanical properties such as elasticity, unfolding and refolding properties, and force-induced conformational changes, (2) AFM imaging that permits us to identify topology of single molecules and supramolecular structures, and (3) protein engineering that allows us to genetically connect elastomeric proteins and self-assembling linkers together to construct well-defined protein building blocks.

Nanospring behavior of á-helical repeat proteins: We revealed that á-helical repeat proteins, composed of tightly packed á-helical repeats that form spiral-shaped protein structures, unfold and refold in near equilibrium, while they are stretched and relaxed during AFM based SMFS measurements. In addition to minimal energy dissipation by the equilibrium process, we also found that these proteins can yield high stretch ratios (>10 times) due to their packed initial forms. Therefore, we, for the first time, recognized a new class of polypeptides with nanospring behaviors.

Protein-based force probes for gauging molecular interactions: We developed protein-based force probes for simple, robust and general AFM assays to accurately measure intermolecular forces between self-oligomerization of two or more arbitrary polypeptides that potentially can serve as molecular crosslinkers. For demonstration, we genetically connected the force probe to the Strep-tag II and mixed it with its molecular self-assembling partner, the Strep-Tactin. Clearly characterized force fingerprints by the force probe allowed identification of molecular interactions of the single Strep-tag II and Strep-Tactin complex when the complex is stretched by AFM. We found a single energy barrier exists between Strep-tag II and Strep-Tactin in our given loading rates. Based upon our demonstration, the use of the force probe can be expanded to investigate the strength of interactions within many protein complexes composed of homo- and hetero-dimers, and even higher oligomeric forms. Obtained information can be used to choose potential self-assembling crosslinkers which can connect elastomeric proteins with appropriate strength in higher-order structures.

Self-assembled nano-structured biomaterials with well-defined protein-based building blocks: We constructed well-defined protein building blocks with tailored mechanical properties for self-assembled nano-structured materials. We engineered protein constructs composed of tandem repeats of either a I27-SNase dimer or a I27 domain alone and terminated them with a monomeric streptavidin which is known to form extremely stable tetramers naturally. By using molecular biology and AFM imaging techniques, we found that these protein building blocks transformed into stable tetrameric complexes. By using AFM based SMFS, we measured, to our knowledge for the first time, the mechanical strength of the streptavidin tetramer at a single-molecule level and captured its mechanical anisotropy. Using streptavidin tetramers as crosslinkers offers a unique opportunity to create well-defined protein based self-assembled materials that preserve the molecular properties of their building blocks.