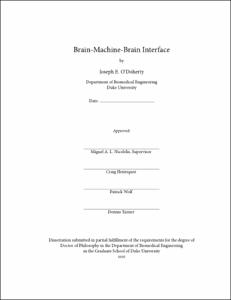 Brain-machine interfaces (BMIs) use neuronal activity to control external actuators. As such, they show great promise for restoring motor and communication abilities in persons with paralysis or debilitating neurological disorders.

While BMIs aim to enact normal sensorimotor functions, so far they have lacked afferent feedback in the form of somatic sensation. This deficiency limits the utility of current BMI designs and may hinder the translation of future clinical BMIs, which will need a means of delivering sensory signals from prosthetic devices back to the user.

This dissertation describes the development of brain-machine-brain interfaces (BMBIs) capable of bidirectional communication with the brain. The interfaces consisted of efferent and afferent modules. The efferent modules decoded motor intentions from the activity of populations of cortical neurons recorded with chronic multielectrode recording arrays. The activity of these ensembles was used to drive the movements of a computer cursor and a realistic upper-limb avatar. The afferent modules encoded tactile feedback about the interactions of the avatar with virtual objects through patterns of intracortical microstimulation (ICMS).

I first show that a direct intracortical signal can be used to instruct rhesus monkeys about the direction of a reach to make with a BMI. Rhesus monkeys placed an actuator over an instruction target and obtained, from the target's artificial texture, information about the correct reach path. Initially these somatosensory instructions took the form of vibrotactile stimulation of the hands. Next, ICMS of primary somatosensory cortex (S1) in one monkey and posterior parietal cortex (PPC) in another was substituted for this peripheral somatosensory signal. Finally, the monkeys made direct brain-controlled reaches using the activity of ensembles of primary motor cortex (M1) cells, conditional on the ICMS cues. The monkey receiving ICMS of S1 was able to achieve the same level of proficiency with ICMS as with the stimulus delivered to the skin of the hand. The monkey receiving ICMS of PPC was unable to perform the task above chance. This experiment indicates that ICMS of S1 can form the basis of an afferent prosthetic input to the brain for guiding brain-controlled prostheses.

I next show that ICMS of S1 can provide feedback about the interactions of a virtual-reality upper-limb avatar and virtual objects, enabling active touch. Rhesus monkeys initially controlled the avatar with the movements of their arms and used it to search through sets of up to three objects. Feedback in the form of temporal patterns of ICMS occurred whenever the avatar touched a virtual object. Monkeys learned to use this feedback to find the objects with particular artificial textures, as encoded by the ICMS patterns, and select those associated with reward while avoiding selecting the non-rewarded objects. Next, the control of the avatar was switched to direct brain-control and the monkeys continued to move the avatar with motor commands derived from the extracellular neuronal activity of M1 cells. The afferent and efferent modules of this BMBI were temporally interleaved, and as such did not interfere with each other, yet allowed effectively concurrent operation. Cortical motor neurons were measured while the monkey passively observed the movements of the avatar and were found to be modulated, a result that suggests that concurrent visual and artificial somatosensory feedback lead to the incorporation of the avatar into the monkey's internal brain representation.

In summary, rhesus monkeys were augmented with a bidirectional neural interface that allowed them to make reaches to objects and discriminate them by their textures--all without making actual movements and without relying on somatic sensation from their real bodies. Both action and perception were mediated by the brain-machine-brain interface. I probed the sensitivity of the afferent leg of the interface to precise temporal patterns of ICMS. Moreover, I describe evidence that the BMBI controlled avatar was incorporated into the monkey's internal brain representation. These results suggest that future clinical neuroprostheses could implement realistic feedback about object-actuator interactions through patterns of ICMS, and that these artificial somatic sensations could lead to the incorporation of the prostheses into the user's body schema.