Direct Carbon--Carbon Bond Formation Through Reductive Soft-Enolization of &alpha;-Halothioesters and The Total Synthesis of (+)-Mefloquine 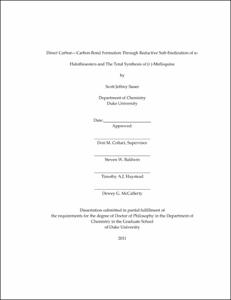 The direct addition of enolizable aldehydes and sulfonyl imines to &alpha;-halo thioesters to produce &beta;-hydroxy/amino thioesters enabled by reductive soft enolization is reported. The transformation is operationally simple and efficient and has the unusual feature of giving high <italic>syn</italic>-selectivity, which is the opposite of that produced for the aldol addition with (thio)esters under conventional conditions. This method is tolerant to aldehydes and imines that not only contain acidic &alpha;-protons, but also towards electrophiles containing other acidic protons and base-sensitive functional groups. Moreover, excellent diastereoselectivity is achieved when a chiral non-racemic &alpha;-hydroxy aldehyde derivative is used. Using MgI2 and Ph3P, this method gives a wide range of aldol and Mannich products in good yields with high <italic>syn</italic>-diastereoselectivity. The products obtained from the reductive aldol and Mannich reactions are synthetically important intermediates in both polyketide and &beta;-lactam synthesis, respectively, and can be readily derivatized to form many carbonyl derivatives through known manipulation of the thioester moiety.

<p>Also, herein the asymmetric synthesis of (+)-mefloquine, a potent anti-malarial compound, is described. The synthesis is based on a key enantioselective Darzens reaction between a chiral &alpha;-chloro-N-amino cyclic carbamate (ACC) hydrazone and a quinoline-based aldehyde. This is a novel methodology developed by our lab, which gives a highly enantioenriched epoxide that can be further functionalized to give both enantiomers of mefloquine.