Citizens of a Genre: Forms, Fields and Practices of Twentieth-Century French and Francophone Ethnographic Fiction 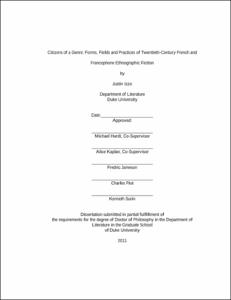 This dissertation examines French and Francophone texts, contexts and thematic problems that comprise a genre I call "ethnographic fiction," whose development we can trace throughout the twentieth century in several geographic locations and in distinct historical moments. During the twentieth century in France, anthropology as an institutionalized discipline and "literature" (writ large) were in constant communication with one another. On the one hand, many French anthropologists produced stylized works demonstrating aesthetic sensibilities that were increasingly difficult to classify. On the other hand, though, poets, philosophers and other literary intellectuals read, absorbed, commented on and attacked texts from anthropology. This century-long conversation produced an interdisciplinary conceptual field allowing French anthropology to borrow from and adapt models from literature at the same time as literature asserted itself as more than just an artistic enterprise and, indeed, as one whose epistemological prerogative was to contribute to and enrich the understanding of humankind and its cultural processes. In this dissertation I argue that fiction can be seen to travel in multiple directions within France's twentieth-century conversation between literature and anthropology such that we can observe the formation of a new genre, one comprised of texts that either explicitly or more implicitly fuse fictional forms and contents together with the methodological and representational imperatives of anthropology and ethnographic fieldwork. Additionally, I argue that fiction moves geographically as well, notably from the metropole to Francophone West Africa which became an anthropological hotspot in the twentieth century once extended field research was legitimated in France and armchair anthropology was thoroughly discredited. By investigating ethnographies, novels, memoirs and films produced both in metropolitan France, Francophone West Africa, and the French Caribbean (including texts by Michel Leiris, Amadou Hampâté Bâ, Jean Rouch, Jean-Claude Izzo and Raphaël Confiant), I aim to shed light on the kinds of work that elements of fiction perform in ethnographic texts and, by contrast, on how ethnographic concepts, strategies and fieldwork methods are implicitly or explicitly adopted and reformulated in more literarily oriented works of fiction. Ethnographic fiction as a genre, then, was born not only from the epistemological rapprochement of anthropology and literature in metropolitan France, but from complex and often fraught encounters with the very locations where anthropological praxis was carried out.