"They Have Travailed Into a Wrong Latitude:" The Laws of England, Indian Settlements, and the British Imperial Constitution 1726-1773 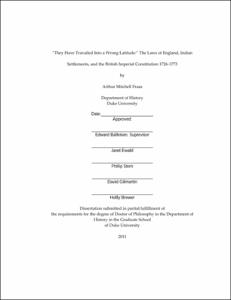 In the mid-eighteenth century the British Crown claimed a network of territories around the globe as its "Empire." Through a close study of law and legal instutions in Bombay, Madras, Calcutta, as well as London, this dissertation examines what it meant to be a part of that Empire. These three cities on the Indian subcontinent were administered by the English East India Company and as such have often seemed abberant or unique to scholars of eighteenth-century empire and law. This dissertation argues that these Indian cities fit squarely within an imperial legal and governmental framework common to the wider British world. Using a variety of legal records and documents, generated in both India and England, the dissertation explores the ways in which local elites and on-the-ground litigants of all national, religious, and cultural backgrounds shaped the colonial legal culture of EIC India. In the process, the dissertation shows the fitful process by which litigants from India, Company officials, and London legal elites struggled over how to define the limits of Empire. The dissertation argues that it was this process of legal wrangling which both defined the mid eighteenth-century Empire and planted the seeds for the more exclusionary colonial order in nineteenth century British India.