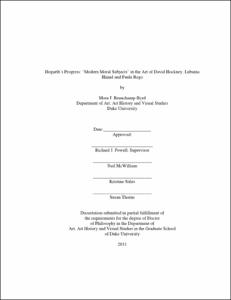 Hogarth's Progress: "Modern Moral Subjects" in the Work of David Hockney, Lubaina Himid and Paula Rego, examines three late twentieth-century, British appropriations of William Hogarth's narrative series. Hogarth is best known for the paintings and engravings that he termed "modern moral subjects," exemplified by satirical series such as The Harlot's Progress (1732) and The Rake's Progress (1733-5). These cautionary yet humorous tales evince a period of great social, political, economic and cultural transformation in England, a time of profound change wrought by colonial enterprise, an increasingly powerful middle class, and a heightened public interest in moral questioning. Recent scholarship on Hogarth has increasingly focused on the artist's diverse representations of eighteenth-century London life, his numerous images of servants of African descent, French dancing masters and Italian castrati. Unsurprisingly, for many contemporary artists, Hogarth's narratives provide a complex visual template for a host of present-day issues regarding race, gender, sexuality and national identity.

The dissertation will investigate how Hogarthian re-workings by artists David Hockney in the early 1960s; Lubaina Himid in the mid-1980s; and Paula Rego in 1999-2000, modify and/or expound upon narratives of gender and sexuality that are already present in the eighteenth century artist's narrative series. The three contemporary works examined here engage with two works by Hogarth: Marriage-a-la-Mode (1745), which chronicles the doomed union of an Earl's son and the daughter of a wealthy merchant, who sells her in marriage to obtain a higher social standing, and The Rake's Progress. Rake recounts the tale of Tom Rakewell, a merchant's son whose exuberant spending and moral decay, aided by a procession of effeminate French dancing masters, prostitutes and criminals, leads to his final residence, the madhouse "Bedlam."

I will first examine David Hockney's early 1960s "Rake's Progress", a series of 16 etchings loosely based on the artist's first visit to the United States, an insertion of his own personal narrative into Hogarth's tale of moral decline. I will then investigate the work of Lubaina Himid, who initiated a Black women artists movement in 1980s London. In 1986, Himid produced a large-scale installation entitled A Fashionable Marriage. The work employs Scene 4 of Hogarth's Marriage-a-la-Mode series to critique the racist and sexist policies of the London art world during this period. Finally, I will discuss the work of Paula Rego, best known for her large-scale paintings of emotionally-charged domestic scenes. Rego has also re-worked Hogarth's Marriage, employing the earlier series to critique arranged marriages in her native Portugal. Rego's triptych entitled After Hogarth: Betrothal; Lessons; Wreck (1999-2001), like much of her work, reveals the psychological anxieties and ambiguities of gender relations and, in a broader sense, human interaction. For Hockney, Himid and Rego, Hogarth's contradictory evocations of eighteenth century London society provide a complex visual template for a host of contemporary issues such as race, gender, sexuality and national identity.

Also critical to this study is the relationship between the three contemporary artists. Hogarth is present as the key driving factor in all three works, yet also to be considered is the role that Hockney, as a critical figure in late twentieth-century art, played in the construction of both Himid and Rego's later works.

Although Hogarth's work has been appropriated by a wealth of artists from the eighteenth through twentieth centuries for a wide variety of uses, this dissertation will examine how three relatively recent quotations employ Hogarth as an "ally in subversion," while simultaneously making use of Hogarth's stature within the English art historical canon. I am proposing that these later uses of Hogarth, many of which explored various configurations of race, gender and sexuality, evolved from a key element inherent within the artist's work, a form of `ambiguous narrativity' that yet somehow appeared to crystallize issues of moral questioning as central ideological theme.