Alternative splicing in multiple sclerosis and other autoimmune diseases. 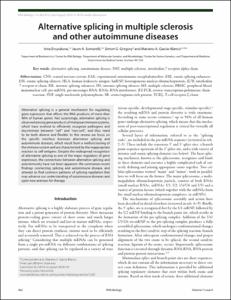 View / Download
17.3 Mb
Date
Authors
Evsyukova, Irina
Somarelli, Jason A
Gregory, Simon G
Garcia-Blanco, Mariano A
Repository Usage Stats
394
views
167
downloads
Abstract
Alternative splicing is a general mechanism for regulating gene expression that affects the RNA products of more than 90% of human genes. Not surprisingly, alternative splicing is observed among gene products of metazoan immune systems, which have evolved to efficiently recognize pathogens and discriminate between "self" and "non-self", and thus need to be both diverse and flexible. In this review we focus on the specific interface between alternative splicing and autoimmune diseases, which result from a malfunctioning of the immune system and are characterized by the inappropriate reaction to self-antigens. Despite the widespread recognition of alternative splicing as one of the major regulators of gene expression, the connections between alternative splicing and autoimmunity have not been apparent. We summarize recent findings connecting splicing and autoimmune disease, and attempt to find common patterns of splicing regulation that may advance our understanding of autoimmune diseases and open new avenues for therapy.
Type
Journal article
Subject
Alternative Splicing
Animals
Autoimmune Diseases
Exons
Humans
Multiple Sclerosis
Receptors, Interleukin-7
Permalink
https://hdl.handle.net/10161/3963
Collections
More Info
Show full item record Adjunct Professor in the Molecular Genetics and Microbiology
Human and viral genes are complex genetic units of information that are tightly regulated. The laboratory studies three aspects of this regulation: the interface between synthesis of mammalian messenger RNAs and the processing events required to mature these transcripts, the alternative processing of these messenger RNAs to produce multiple proteins from one gene, and the regulation of gene expression in human pathogenic flaviviruses. In the great majority of human transcripts Professor in Neurosurgery
Dr. Gregory is a tenured Professor and Director of the Brain Tumor Omics Program (BTOP) in the Duke Department of Neurosurgery, the Vice Chair of Research in the Department of Neurology, and Director of the Molecular Genomics Core at the Duke Molecular Physiology Institute.  As a neurogenomicist, Dr. Gregory applies the experience gained from leading the sequencing of chromosome 1 for the Human Genome Project to elucidating the mechanisms underlying multi-factorial