VCP/p97 is essential for maturation of ubiquitin-containing autophagosomes and this function is impaired by mutations that cause IBMPFD. 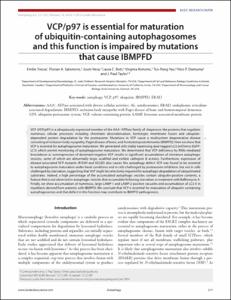 Professor of Pharmacology and Cancer Biology
My laboratory studies the regulatory functions of protein acetylation in cell signaling and human disease. We focus on a class of protein deacetylases, HDACs, which we have discovered versatile functions beyond gene transcription. We wish to use knowledge of HDAC biology to develop smart and rational clinical strategies for HDAC inhibitors, a growing class of compounds that show potent anti-tumor and other clinically relevant activities. Currently, there two major research major areas