Potent and broad neutralizing activity of a single chain antibody fragment against cell-free and cell-associated HIV-1. 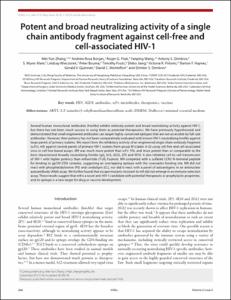 Professor in Medicine
Research Interests.  The Alam laboratory’s primary research is focused on understanding the biophysical properties of antigen-antibody binding and the molecular events of early B cell activation using the HIV-1 broadly neutralizing antibody (bnAb) lineage models. We are studying how HIV-1 Envelope proteins of varying affinities are sensed by B cells expressing HIV-1 bnAbs or their germline antigen receptors and initiate early signaling events for their activation. In the lon

Professor in Surgery
Dr. Montefiori is Professor and Director of the Laboratory for AIDS Vaccine Research and Development in the Department of Surgery, Division of Surgical Sciences, Duke University Medical Center. His major research interests are viral immunology and AIDS vaccine development, with a special emphasis on neutralizing antibodies. One of his highest priorities is to identify immunogens that generate broadly cross-reactive neutralizing antibodies for inclusion in HIV vaccines.  Many aspects of the
Alphabetical list of authors with Scholars@Duke profiles.