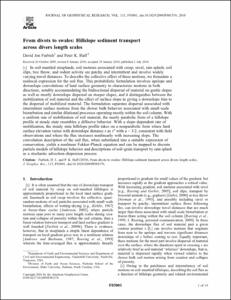 View / Download
501.9 Kb
Date
Authors
Furbish, David Jon
Haff, Peter K
Repository Usage Stats
272
views
373
downloads
Abstract
In soil-mantled steeplands, soil motions associated with creep, ravel, rain splash, soil slips, tree throw, and rodent activity are patchy and intermittent and involve widely varying travel distances. To describe the collective effect of these motions, we formulate a nonlocal expression for the soil flux. This probabilistic formulation involves upslope and downslope convolutions of land surface geometry to characterize motions in both directions, notably accommodating the bidirectional dispersal of material on gentle slopes as well as mostly downslope dispersal on steeper slopes, and it distinguishes between the mobilization of soil material and the effect of surface slope in giving a downslope bias to the dispersal of mobilized material. The formulation separates dispersal associated with intermittent surface motions from the slower bulk behavior associated with small-scale bioturbation and similar dilational processes operating mostly within the soil column. With a uniform rate of mobilization of soil material, the nearly parabolic form of a hillslope profile at steady state resembles a diffusive behavior. With a slope-dependent rate of mobilization, the steady state hillslope profile takes on a nonparabolic form where land surface elevation varies with downslope distance x as x(a) with a similar to 3/2, consistent with field observations and where the flux increases nonlinearly with increasing slope. The convolution description of the soil flux, when substituted into a suitable expression of conservation, yields a nonlinear Fokker-Planck equation and can be mapped to discrete particle models of hillslope behavior and descriptions of soil-grain transport by rain splash as a stochastic advection-dispersion process.
Type
Other article
Subject
soil production
field evidence
evolution
diffusion
microtopography
bioturbation
distance
creep
geosciences, multidisciplinary
Permalink
https://hdl.handle.net/10161/3978
Published Version (Please cite this version)
10.1029/2009JF001576
Citation
Furbish,David Jon;Haff,Peter K.. 2010. From divots to swales: Hillslope sediment transport across divers length scales. Journal of Geophysical Research-Earth Surface 115( ): F03001-F03001.
Collections
More Info
Show full item record Professor Emeritus
The neoenvironment is the total environment in which we live. It is the sum of the natural, human, and technological systems and processes that surround us. It includes for example forest ecosystems, animals and machines, nanotechnology, the internet, highways, medical systems, power grids, human populations, political parties, governments and bureaucracies, robots and religions and their interactions with each other. In an age in which both the level and acceleration of techno