Delineating the maladaptive pathways of child maltreatment: A mediated moderation analysis of the roles of self-perception and social support 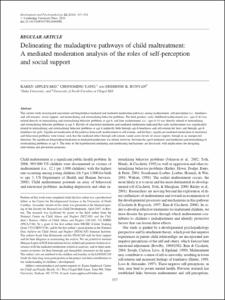 Associate Professor in Psychiatry and Behavioral Sciences
Karen Appleyard Carmody, PhD, serves as the Director of Early Childhood Prevention Programs for the Center for Child and Family Health (CCFH). She is a licensed psychologist and associate professor in the Department of Psychiatry and Behavioral Sciences and the Department of Psychology and Neuroscience. Her clinical and research expertise is in infant mental health, child-parent attachment, early childhood trauma and maltreatment, and evidence-based practices to address these issues. She