Energy, water, and carbon fluxes in a loblolly pine stand: Results from uniform and gappy canopy models with comparisons to eddy flux data 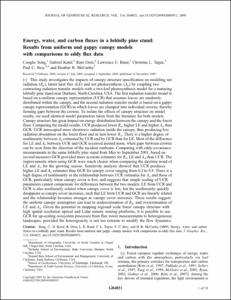 View / Download
3.6 Mb
Date
Authors
Song, C
Katul, G
Oren, R
Band, LE
Tague, CL
Stoy, PC
McCarthy, HR
Repository Usage Stats
241
views
289
downloads
Abstract
This study investigates the impacts of canopy structure specification on modeling net radiation (Rn), latent heat flux (LE) and net photosynthesis (An) by coupling two contrasting radiation transfer models with a two-leaf photosynthesis model for a maturing loblolly pine stand near Durham, North Carolina, USA. The first radiation transfer model is based on a uniform canopy representation (UCR) that assumes leaves are randomly distributed within the canopy, and the second radiation transfer model is based on a gappy canopy representation (GCR) in which leaves are clumped into individual crowns, thereby forming gaps between the crowns. To isolate the effects of canopy structure on model results, we used identical model parameters taken from the literature for both models. Canopy structure has great impact on energy distribution between the canopy and the forest floor. Comparing the model results, UCR produced lower Rn, higher LE and higher A n than GCR. UCR intercepted more shortwave radiation inside the canopy, thus producing less radiation absorption on the forest floor and in turn lower Rn. There is a higher degree of nonlinearity between A n estimated by UCR and by GCR than for LE. Most of the difference for LE and An between UCR and GCR occurred around noon, when gaps between crowns can be seen from the direction of the incident sunbeam. Comparing with eddy-covariance measurements in the same loblolly pine stand from May to September 2001, based on several measures GCR provided more accurate estimates for Rn, LE and An than UCR. The improvements when using GCR were much clearer when comparing the daytime trend of LE and An for the growing season. Sensitivity analysis showed that UCR produces higher LE and An estimates than GCR for canopy cover ranging from 0.2 to 0.8. There is a high degree of nonlinearity in the relationship between UCR estimates for An and those of GCR, particularly when canopy cover is low, and suggests that simple scaling of UCR parameters cannot compensate for differences between the two models. LE from UCR and GCR is also nonlinearly related when canopy cover is low, but the nonlinearity quickly disappears as canopy cover increases, such that LE from UCR and GCR are linearly related and the relationship becomes stronger as canopy cover increases. These results suggest the uniform canopy assumption can lead to underestimation of Rn, and overestimation of LE and An. Given the potential in mapping regional scale forest canopy structure with high spatial resolution optical and Lidar remote sensing plotforms, it is possible to use GCR for up-scaling ecosystem processes from flux tower measurements to heterogeneous landscapes, provided the heterogeneity is not too extreme to modify the flow dynamics. Copyright 2009 by the American Geophysical Union.
Type
Journal article
Permalink
https://hdl.handle.net/10161/3985
Published Version (Please cite this version)
10.1029/2009JG000951
Publication Info
Song, C; Katul, G; Oren, R; Band, LE; Tague, CL; Stoy, PC; & McCarthy, HR (2009). Energy, water, and carbon fluxes in a loblolly pine stand: Results from uniform and gappy canopy models with comparisons to eddy flux data. Journal of Geophysical Research: Biogeosciences, 114(4). pp. G04021. 10.1029/2009JG000951. Retrieved from https://hdl.handle.net/10161/3985.
This is constructed from limited available data and may be imprecise. To cite this article, please review & use the official citation provided by the journal.
Collections
More Info
Show full item record Theodore S. Coile Distinguished Professor of Hydrology and Micrometeorology
Gabriel G. Katul received his B.E. degree in 1988 at the American University of Beirut (Beirut, Lebanon), his M.S. degree in 1990 at Oregon State University (Corvallis, OR) and his Ph.D degree in 1993 at the University of California in Davis (Davis, CA).  He currently holds the Theodore S. Coile Professor of Hydrology and Micrometeorology at the Nicholas School of the Environment and at the Department of Civil and Environmental Engineering at Duke University (Du Nicholas Distinguished Professor of Earth Systems Science
With his graduate students, Oren quantifies components of the water cycle in forest ecosystems, and their responses to biotic and abiotic factors. Relying on the strong links between the carbon and water cycles, he also studies the components of the carbon flux and their response to these factors. Climate variability, including variations in air temperature, vapor pressure deficit, incoming radiation and soil moisture, and environmental change, including elevated atmospheric carbon dioxide, affe
Alphabetical list of authors with Scholars@Duke profiles.