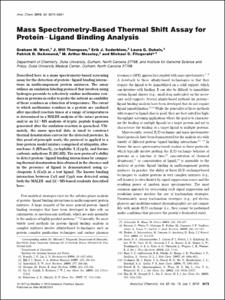 Adjunct Assistant Professor in the Department of Pharmacology & Cancer Biology
Dr. Thompson's research focuses on the development and deployment of proteomics and metabolomics mass spectrometry techniques for the analysis of biological systems. He served as the Assistant Director of the Proteomics and Metabolomics Shared Resource in the Duke School of Medicine from 2007-2021. He currently maintains collaborations in metabolomics and proteomics research at Duke, and develops new tools for chemical analysis as a Princi
Alphabetical list of authors with Scholars@Duke profiles.