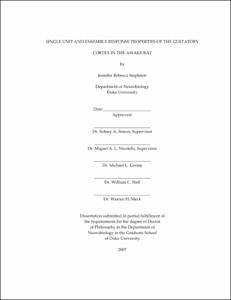 View / Download
7.4 Mb
Date
Author
Stapleton, Jennifer Rebecca
Repository Usage Stats
335
views
283
downloads
Abstract
Most studies of gustatory coding have been performed in either anesthetized or awake, passively stimulated rats. In this dissertation the influences of behavioral state on gustatory processing in awake rats are described. In the first set of experiments, the effects of non-contingent tastant delivery on the chemical tuning of single neurons were explored. Tastants were delivered non-contingently through intra-oral cannulas to restrained, non water-deprived rats while single unit responses were recorded from the gustatory cortex (GC). As the subjects' behavior progressed from acceptance to rejection of the tastants, the chemical tuning of the neurons changed as well. This suggests that the subjects' behavioral state powerfully influences gustatory processing. In the second set of experiments, rats were trained to lick for fluid reinforcement on an FR5 schedule while single unit activity was recorded from GC. In this case, the chemical tuning was much more stable. Under this paradigm, chemosensory responses were rapid (~ 150 ms) and broadly tuned. In the third study, it was found that ensembles of GC neurons could discriminate between tastants and their concentrations on a single trial basis, and such discrimination was accomplished with a combination of rate and temporal coding. Ensembles of GC neurons also anticipated the identity of the upcoming stimulus when the tastant delivery was predictable. Finally, it was found that ensembles of GC neurons could discriminate between the bitter stimuli nicotine and quinine. Nicotine is both a bitter tastant and a trigeminal stimulant, and when the acetylcholine receptors in the lingual epithelium were blocked with mecamylamine, the ensembles failed to discriminate nicotine from quinine.
Type
Dissertation
Department
Neurobiology
Subject
Biology, Neuroscience
gustatory cortex
taste
generalized linear model
multi-unit electrophysiology
ensembles
fixed ratio schedule
Permalink
https://hdl.handle.net/10161/404
Citation
Stapleton, Jennifer Rebecca (2007). SINGLE UNIT AND ENSEMBLE RESPONSE PROPERTIES OF THE GUSTATORY CORTEX IN THE AWAKE RAT. Dissertation, Duke University. Retrieved from https://hdl.handle.net/10161/404.
Collections
More Info
Show full item record