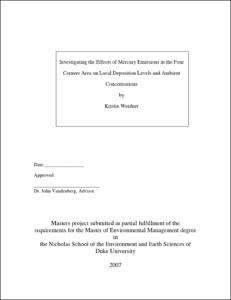 View / Download
6.7 Mb
Date
Author
Weidner, Kristin
Advisor
Vandenberg, John
Repository Usage Stats
288
views
988
downloads
Abstract
In 2005, the United States Environmental Protection Agency (EPA) issued the Clean Air Mercury Rule (CAMR) as a means for regulating mercury emissions from coal-fired utility boilers in the United States. However, there is concern that this rule may result in local ‘hot spots’ of increased mercury in the environment surrounding these facilities. Citizens of the Four Corners region in the southwest are particularly concerned about this rule due to the presence of two of the highest mercury-emitting facilities in the country. While studies have shown that an increase in atmospheric levels of mercury lead to a global increase in mercury deposition, little is known on the effects air emissions from point sources on local mercury levels in the environment. In this study, mercury emissions from the Four Corners Power Plant and the San Juan Generating Station of New Mexico were investigated for their possible impacts on local mercury levels in the environment. The analysis included statistical and back trajectory analysis of deposition data at a nearby monitoring site, as well as SCREEN dispersion modeling of mercury emissions to calculate mercury concentrations in the ambient air. Results of the statistical analysis of the deposition data showed a relationship between precipitation and deposition levels, with higher deposition associated with higher precipitation. However, season was also shown to have an effect, with summer having the highest levels of deposition in the area, despite having only the second highest level of precipitation, suggesting complexity in the relationship that was infeasible to fully evaluate with the available data. The results of the back trajectory analysis suggested an association between high deposition and trajectories coming from the southwest and passing within 50 kilometers of the facilities. However, the small sample size of dates available for back trajectory analysis leads to caution in interpreting the results. More extensive monitoring schemes are proposed in order to perform more elaborate back trajectory analysis. With the proposed monitoring scheme it is believed that source attribution analysis may be performed to determine the contribution of the Four Corners and San Juan facilities to local mercury deposition levels. Results from the SCREEN dispersion model of the facilities’ emissions were compared to EPA and California Office of Environmental Health Hazard Assessment (OEHHA) reference levels to assess possible health risks due to inhalation. Results from the dispersion analysis showed maximum ambient concentrations of 0.030 µg/m3 of elemental mercury and 0.032 µg/m3 of total mercury. Neither of these concentrations exceeds either the EPA or OEHHA reference levels. However, given that they are on the same order of magnitude of the OEHHA reference level, more extensive modeling may be required with more detailed emissions estimates.
Type
Master's project
Department
Nicholas School of the Environment and Earth Sciences
Subject
mercury deposition
back trajectory analysis
Clean Air Mercury Rule
mercury monitoring
Permalink
https://hdl.handle.net/10161/407
Citation
Weidner, Kristin (2007). Investigating the Effects of Mercury Emissions in the Four Corners Area on Local Deposition Levels and Ambient Concentrations. Master's project, Duke University. Retrieved from https://hdl.handle.net/10161/407.
Collections
More Info
Show full item record