Jamming for a 2D granular material 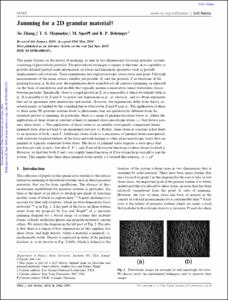 View / Download
515.4 Kb
Date
Authors
Zhang, J
Majmudar, TS
Sperl, M
Behringer, RP
Repository Usage Stats
287
views
629
downloads
Abstract
This paper focuses on the nature of jamming, as seen in two-dimensional frictional granular systems consisting of photoelastic particles. The photoelastic technique is unique at this time, in its capability to provide detailed particle-scale information on forces and kinematic quantities such as particle displacements and rotations. These experiments first explore isotropic stress states near point J through measurements of the mean contact number per particle, Z, and the pressure, P as functions of the packing fraction, . In this case, the experiments show some but not all aspects of jamming, as expected on the basis of simulations and models that typically assume conservative, hence frictionless, forces between particles. Specifically, there is a rapid growth in Z, at a reasonable which we identify with as c. It is possible to fit Z and P, to power law expressions in - c above c, and to obtain exponents that are in agreement with simulations and models. However, the experiments differ from theory on several points, as typified by the rounding that is observed in Z and P near c. The application of shear to these same 2D granular systems leads to phenomena that are qualitatively different from the standard picture of jamming. In particular, there is a range of packing fractions below c, where the application of shear strain at constant leads to jammed stress-anisotropic states, i.e. they have a non-zero shear stress, τ. The application of shear strain to an initially isotropically compressed (hence jammed) state, does not lead to an unjammed state per se. Rather, shear strain at constant first leads to an increase of both τ and P. Additional strain leads to a succession of jammed states interspersed with relatively localized failures of the force network leading to other stress-anisotropic states that are jammed at typically somewhat lower stress. The locus of jammed states requires a state space that involves not only and τ, but also P. P, τ, and Z are all hysteretic functions of shear strain for fixed . However, we find that both P and τ are roughly linear functions of Z for strains large enough to jam the system. This implies that these shear-jammed states satisfy a Coulomb like-relation, τ = μP. © 2010 The Royal Society of Chemistry.
Type
Journal article
Permalink
https://hdl.handle.net/10161/4125
Published Version (Please cite this version)
10.1039/c000147c
Publication Info
Zhang, J; Majmudar, TS; Sperl, M; & Behringer, RP (2010). Jamming for a 2D granular material. Soft Matter, 6(13). pp. 2982-2991. 10.1039/c000147c. Retrieved from https://hdl.handle.net/10161/4125.
This is constructed from limited available data and may be imprecise. To cite this article, please review & use the official citation provided by the journal.
Collections
More Info
Show full item record James B. Duke Professor of Physics
Dr. Behringer's research interests include granular materials: friction, earthquakes, jamming; nonlinear dynamics; and fluids: Rayleigh-Benard convection, the flow of thin liquid films, porous media flow, and quantum fluids. His studies focus particularly on experiments (with some theory/simulation) that yield new insights into the dynamics and complex behavior of these systems. His experiments involve a number of highly novel approaches, including the use of photoelasticity for probing granular
This author no longer has a Scholars@Duke profile, so the information shown here reflects their Duke status at the time this item was deposited.