Lessons Learned from the Anaerobe Survey: Historical Perspective and Review of the Most Recent Data (2005-2007) 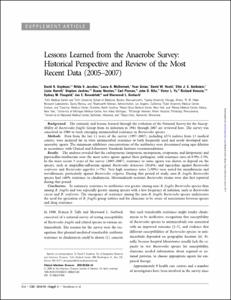 View / Download
365.2 Kb
Date
Author
Harrell, Lizzie J
Repository Usage Stats
266
views
258
downloads
Abstract
Background. The rationale and lessons learned through the evolution of the National Survey for the Susceptibility of Bacteroides fragilis Group from its initiation in 1981 through 2007 are reviewed here. The survey was conceived in 1980 to track emerging antimicrobial resistance in Bacteroides species. Methods. Data from the last 11 years of the survey (1997-2007), including 6574 isolates from 13 medical centers, were analyzed for in vitro antimicrobial resistance to both frequently used and newly developed anti-anaerobic agents. The minimum inhibitory concentrations of the antibiotics were determined using agar dilution in accordance with Clinical and Laboratory Standards Institute recommendations. Results. The analyses revealed that the carbapenems (imipenem, meropenem, ertapenem, and doripenem) and piperacillin-tazobactam were the most active agents against these pathogens, with resistance rates of 0.9%-2.3%. In the most recent 3 years of the survey (2005-2007), resistance to some agents was shown to depend on the species, such as ampicillin-sulbactam against Bacteroides distasonis (20.6%) and tigecycline against Bacteroides uniformis and Bacteroides eggerthii (similar to 7%). Very high resistance rates (>50%) were noted for moxifloxacin and trovafloxacin, particularly against Bacteroides vulgatus. During that period of study, non-B. fragilis Bacteroides species had >40% resistance to clindamycin. Metronidazole-resistant Bacteroides strains were also first reported during that period. Conclusions. In summary, resistance to antibiotics was greater among non-B. fragilis Bacteroides species than among B. fragilis and was especially greater among species with a low frequency of isolation, such as Bacteroides caccae and B. uniformis. The emergence of resistance among the non-B. fragilis Bacteroides species underscores the need for speciation of B. fragilis group isolates and for clinicians to be aware of associations between species and drug resistance.
Type
Other article
Subject
bacteroides-fragilis group
antimicrobial susceptibility patterns
in-vitro activities
united-states
national-survey
resistance
trends
multicenter
bacteria
immunology
infectious diseases
microbiology
Permalink
https://hdl.handle.net/10161/4135
Published Version (Please cite this version)
10.1086/647940
Citation
Snydman,David R.;Jacobus,Nilda V.;McDermott,Laura A.;Golan,Yoav;Hecht,David W.;Goldstein,Ellie J. C.;Harrell,Lizzie;Jenkins,Stephen;Newton,Duane;Pierson,Carl;Rihs,John D.;Yu,Victor L.;Venezia,Richard;Finegold,Sydney M.;Rosenblatt,Jon E.;Gorbach,Sherwood L.. 2010. Lessons Learned from the Anaerobe Survey: Historical Perspective and Review of the Most Recent Data (2005-2007). Clinical Infectious Diseases 50( ): S26-S33.
Collections
More Info
Show full item record

Research Professor Emeritus of Molecular Genetics and Microbiology
I am a clinical microbiologist and our laboratory is responsible for detecting, isolating, identifying, and performing antimicrobial susceptibility tests on bacteria that cause infections in patients seen at Duke University Medical Center. My research interests include investigating emerging antibiotic-resistant bacteria and the use of molecular techniques for diagnosing infectious diseases. All of these activities involve collaboration with the Infectious Diseases service, the Infection C