Reconsidering Baron and Kenny: Myths and Truths about Mediation Analysis 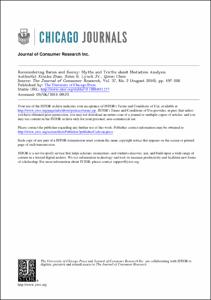 View / Download
1.4 Mb
Date
Authors
Zhao, X
Lynch, JG
Chen, Q
Repository Usage Stats
1,338
views
29,641
downloads
Abstract
Baron and Kenny's procedure for determining if an independent variable affects a dependent variable through some mediator is so well known that it is used by authors and requested by reviewers almost reflexively. Many research projects have been terminated early in a research program or later in the review process because the data did not conform to Baron and Kenny's criteria, impeding theoretical development. While the technical literature has disputed some of Baron and Kenny's tests, this literature has not diffused to practicing researchers. We present a nontechnical summary of the flaws in the Baron and Kenny logic, some of which have not been previously noted. We provide a decision tree and a step-by-step procedure for testing mediation, classifying its type, and interpreting the implications of findings for theory building and future research.
Type
Other article
Subject
models
regression
business
Permalink
https://hdl.handle.net/10161/4143
Published Version (Please cite this version)
10.1086/651257
Citation
Zhao,Xinshu;Lynch,John G., Jr.;Chen,Qimei. 2010. Reconsidering Baron and Kenny: Myths and Truths about Mediation Analysis. Journal of Consumer Research 37(2): 197-206.
Collections
More Info
Show full item record