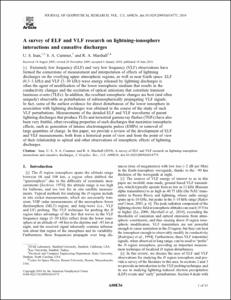 View / Download
2.3 Mb
Date
Authors
Inan, US
Cummer, SA
Marshall, RA
Repository Usage Stats
258
views
742
downloads
Abstract
Extremely low frequency (ELF) and very low frequency (VLF) observations have formed the cornerstone of measurement and interpretation of effects of lightning discharges on the overlying upper atmospheric regions, as well as near-Earth space. ELF (0.3-3 kHz) and VLF (3-30 kHz) wave energy released by lightning discharges is often the agent of modification of the lower ionospheric medium that results in the conductivity changes and the excitation of optical emissions that constitute transient luminous events (TLEs). In addition, the resultant ionospheric changes are best (and often uniquely) observable as perturbations of subionospherically propagating VLF signals. In fact, some of the earliest evidence for direct disturbances of the lower ionosphere in association with lightning discharges was obtained in the course of the study of such VLF perturbations. Measurements of the detailed ELF and VLF waveforms of parent lightning discharges that produce TLEs and terrestrial gamma ray flashes (TGFs) have also been very fruitful, often revealing properties of such discharges that maximize ionospheric effects, such as generation of intense electromagnetic pulses (EMPs) or removal of large quantities of charge. In this paper, we provide a review of the development of ELF and VLF measurements, both from a historical point of view and from the point of view of their relationship to optical and other observations of ionospheric effects of lightning discharges. Copyright © 2010 by the American Geophysical Union.
Type
Journal article
Permalink
https://hdl.handle.net/10161/4168
Published Version (Please cite this version)
10.1029/2009JA014775
Publication Info
Inan, US; Cummer, SA; & Marshall, RA (2010). A survey of ELF and VLF research on lightning-ionosphere interactions and causative discharges. Journal of Geophysical Research: Space Physics, 115(6). pp. A00E36. 10.1029/2009JA014775. Retrieved from https://hdl.handle.net/10161/4168.
This is constructed from limited available data and may be imprecise. To cite this article, please review & use the official citation provided by the journal.
Collections
More Info
Show full item record