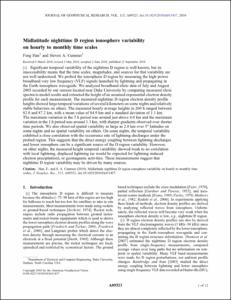 View / Download
2.0 Mb
Date
Authors
Han, F
Cummer, SA
Repository Usage Stats
205
views
194
downloads
Abstract
Significant temporal variability of the nighttime D region is well known, but its inaccessibility means that the time scales, magnitudes, and sources for that variability are not well understood. We probed the ionospheric D region by measuring the high-power broadband very low frequency (VLF) signals launched by lightning and propagating in the Earth-ionosphere waveguide. We analyzed broadband sferic data of July and August 2005 recorded by our sensors located near Duke University by comparing measured sferic spectra to model results and extracted the height of an assumed exponential electron density profile for each measurement. The measured nighttime D region electron density profile heights showed large temporal variations of several kilometers on some nights and relatively stable behaviors on others. The measured hourly average heights in 260 h ranged between 82.0 and 87.2 km, with a mean value of 84.9 km and a standard deviation of 1.1 km. The maximum variation in the 5 h period was around just above 4.0 km and the maximum variation in the 1 h period was around 1.3 km, with sharper gradients observed over shorter time periods. We also observed spatial variability as large as 2.0 km over 5° latitudes on some nights and no spatial variability on others. On some nights, the temporal variability exhibited a close correlation with the occurrence rate of lightning discharges under the probed region. This suggests that the direct energy coupling between lightning discharges and lower ionosphere can be a significant source of the D region variability. However, on other nights, the measured height temporal variability showed weak to no correlation with local lightning, displaced lightning (as would be expected for lightning-induced electron precipitation), or geomagnetic activities. These measurements suggest that nighttime D region variability may be driven by many sources. Copyright 2010 by the American Geophysical Union.
Type
Journal article
Permalink
https://hdl.handle.net/10161/4169
Published Version (Please cite this version)
10.1029/2010JA015437
Publication Info
Han, F; & Cummer, SA (2010). Midlatitude nighttime D region ionosphere variability on hourly to monthly time scales. Journal of Geophysical Research: Space Physics, 115(9). pp. A09323. 10.1029/2010JA015437. Retrieved from https://hdl.handle.net/10161/4169.
This is constructed from limited available data and may be imprecise. To cite this article, please review & use the official citation provided by the journal.
Collections
More Info
Show full item record