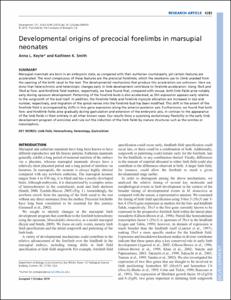 View / Download
1.3 Mb
Date
Authors
Keyte, Anna L
Smith, Kathleen K
Repository Usage Stats
252
views
186
downloads
Abstract
Marsupial mammals are born in an embryonic state, as compared with their eutherian counterparts, yet certain features are accelerated. The most conspicuous of these features are the precocial forelimbs, which the newborns use to climb unaided from the opening of the birth canal to the teat. The developmental mechanisms that produce this acceleration are unknown. Here we show that heterochronic and heterotopic changes early in limb development contribute to forelimb acceleration. Using Tbx5 and Tbx4 as fore- and hindlimb field markers, respectively, we have found that, compared with mouse, both limb fields arise notably early during opossum development. Patterning of the forelimb buds is also accelerated, as Shh expression appears early relative to the outgrowth of the bud itself. In addition, the forelimb fields and forelimb myocyte allocation are increased in size and number, respectively, and migration of the spinal nerves into the forelimb bud has been modified. This shift in the extent of the forelimb field is accompanied by shifts in Hox gene expression along the anterior-posterior axis. Furthermore, we found that both fore- and hindlimb fields arise gradually during gastrulation and extension of the embryonic axis, in contrast to the appearance of the limb fields in their entirety in all other known cases. Our results show a surprising evolutionary flexibility in the early limb development program of amniotes and rule out the induction of the limb fields by mature structures such as the somites or mesonephros.
Type
Journal article
Subject
Animals
Animals, Newborn
Forelimb
Hedgehog Proteins
Immunohistochemistry
Marsupialia
Permalink
https://hdl.handle.net/10161/4175
Published Version (Please cite this version)
10.1242/dev.049445
Publication Info
Keyte, Anna L; & Smith, Kathleen K (2010). Developmental origins of precocial forelimbs in marsupial neonates. Development, 137(24). pp. 4283-4294. 10.1242/dev.049445. Retrieved from https://hdl.handle.net/10161/4175.
This is constructed from limited available data and may be imprecise. To cite this article, please review & use the official citation provided by the journal.
Collections
More Info
Show full item record Professor Emerita of Biology
My current work is a focus on the relation between evolution and development in the mammalian skull. My model system involves comparisons of development in placental and marsupial mammals. These mammals are characterized by different developmental trajectories, extending back to some of the earliest events of differentiation, largely as a result of their different life history adaptations. My work focuses on a number of different questions. First, what are the differences in the devel