Neuroprotection resulting from insufficiency of RANBP2 is associated with the modulation of protein and lipid homeostasis of functionally diverse but linked pathways in response to oxidative stress. 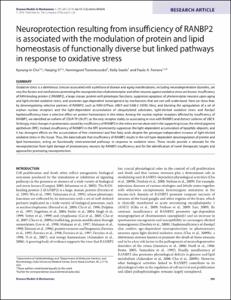 View / Download
1.5 Mb
Date
Authors
Cho, Kyoung-in
Yi, Haiqing
Tserentsoodol, Nomingerel
Searle, Kelly
Ferreira, Paulo A
Repository Usage Stats
277
views
257
downloads
Abstract
Oxidative stress is a deleterious stressor associated with a plethora of disease and aging manifestations, including neurodegenerative disorders, yet very few factors and mechanisms promoting the neuroprotection of photoreceptor and other neurons against oxidative stress are known. Insufficiency of RAN-binding protein-2 (RANBP2), a large, mosaic protein with pleiotropic functions, suppresses apoptosis of photoreceptor neurons upon aging and light-elicited oxidative stress, and promotes age-dependent tumorigenesis by mechanisms that are not well understood. Here we show that, by downregulating selective partners of RANBP2, such as RAN GTPase, UBC9 and ErbB-2 (HER2; Neu), and blunting the upregulation of a set of orphan nuclear receptors and the light-dependent accumulation of ubiquitylated substrates, light-elicited oxidative stress and Ranbp2 haploinsufficiency have a selective effect on protein homeostasis in the retina. Among the nuclear orphan receptors affected by insufficiency of RANBP2, we identified an isoform of COUP-TFI (Nr2f1) as the only receptor stably co-associating in vivo with RANBP2 and distinct isoforms of UBC9. Strikingly, most changes in proteostasis caused by insufficiency of RANBP2 in the retina are not observed in the supporting tissue, the retinal pigment epithelium (RPE). Instead, insufficiency of RANBP2 in the RPE prominently suppresses the light-dependent accumulation of lipophilic deposits, and it has divergent effects on the accumulation of free cholesterol and free fatty acids despite the genotype-independent increase of light-elicited oxidative stress in this tissue. Thus, the data indicate that insufficiency of RANBP2 results in the cell-type-dependent downregulation of protein and lipid homeostasis, acting on functionally interconnected pathways in response to oxidative stress. These results provide a rationale for the neuroprotection from light damage of photosensory neurons by RANBP2 insufficiency and for the identification of novel therapeutic targets and approaches promoting neuroprotection.
Type
Journal article
Subject
Animals
COUP Transcription Factor I
Cholesterol
Cytoprotection
Fatty Acids
Haploinsufficiency
Homeostasis
Light
Lipid Metabolism
Mice
Models, Biological
Molecular Chaperones
Nuclear Pore Complex Proteins
Oxidative Stress
Protein Binding
Protein Isoforms
Retinal Neurons
Retinal Pigment Epithelium
Signal Transduction
Ubiquitin-Conjugating Enzymes
Ubiquitinated Proteins
Permalink
https://hdl.handle.net/10161/4182
Published Version (Please cite this version)
10.1242/dmm.004648
Publication Info
Cho, Kyoung-in; Yi, Haiqing; Tserentsoodol, Nomingerel; Searle, Kelly; & Ferreira, Paulo A (2010). Neuroprotection resulting from insufficiency of RANBP2 is associated with the modulation of protein and lipid homeostasis of functionally diverse but linked pathways in response to oxidative stress. Dis Model Mech, 3(9-10). pp. 595-604. 10.1242/dmm.004648. Retrieved from https://hdl.handle.net/10161/4182.
This is constructed from limited available data and may be imprecise. To cite this article, please review & use the official citation provided by the journal.
Collections
More Info
Show full item record Associate Professor in Ophthalmology
The long-term goal of our research program is twofold. The first is to understand the interplay between intracellular signaling, intracellular trafficking and proteostasis in health and disease; the second is to uncover molecular players and mechanisms partaking in such processes that are amenable to therapeutic intervention in a variety of disease states. Presently, our research efforts are centered on dissecting the roles of two disease-associated protein interactomes assembled by the Ran